The New Face Of Milan

A city in Italy has bucked the national trend towards irredeemable decline: Milan. 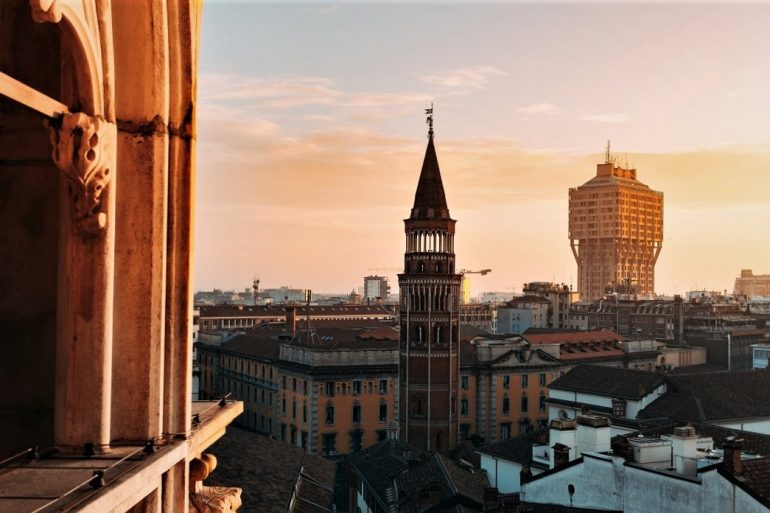 A city in Italy has bucked the national trend towards irredeemable decline: Milan

Italy has the unenviable fortune of having lived through not one, but two lost decades. Italy, among other things, has several depressing primates, such as one of the most anaemic levels of growth, one of the lowest occupational rates in Western Europe, including for women and young. Italy still continues to invest too little in education, while increasing numbers of young people migrate to other countries to fulfil their aspirations. Moreover, investment in research and development is also depressingly low, as well as investment in other infrastructure.

However, an unusually bright spot lingers on the map of Italy, and that is the city of Milan. Long mocked for its murky politics that gave rise to the Tangetopoli crisis which finished off the entire political class in Italy during the early 1990s, it has also been criticized in numerous occasions as ugly with unflattering architectural aesthetics compared to other Italian cities. Other unfortunate traits include having a miserable weather and a chronic pollution problem. Its hinterland is a vast and amorphous continuation of anonymous detached houses inhabited by far-right Northern League sympathizers, which slowly give way to post-industrial Jurassic parks and Stalinist wastelands as you approach the centre of the city. Devoid of the international and cultural magnetism of London, Madrid, Berlin or Paris, or the beauty of Barcelona, Milan had long consigned itself to being a dull and grey place epitomized by the opening sequence of the film “I am Love,” where people go to work and eek an existence under a sea of concrete slabs.

It is however under these most inauspicious premises that a little miracle has occurred. A city in Italy has indeed bucked the national trend towards irredeemable decline. Moreover, there is a city in Italy which now continues to see consecutives trimesters of economic growth, posts increasing numbers of job creation, and attracts people from other parts of the country, if not Europe. Indeed, Milan increased its share of Italy’s gross domestic product by an astonishing 17.7%, far more than its closest competitors. There are a few recipe ingredients that have contributed to this success story.

Milan has benefitted from a continuous streak of effective and dynamic leaders, first through the leftist Giuliano Pisapia, and second by the more centrist Giuseppe Sala. Both their administrations have so far benefitted from a stable governance, the absence of major political scandals or at least not on the scale of Tangentopoli, or more recently with one of the former presidencies of the Lombardy region. They have both enabled the pursuit of consensual bipartisan policies, as well as long-term planning. A characteristic feature of this new form of leadership has been for example the holding of regular meet-ups in public squares between former mayor Pisapia and members of the general public, miles away from the blue government cars and high-level security seen in Rome.

A notable factor that has contributed to Milan’s renewed status has been its commitment to change its face quite literally. Many of the old and drab buildings having recladded to provide a cleaner and more modern look. Beyond restorative work Milan’s facelift was made possible by heavy investments into building new high-profile architectures — if not entirely new neighbourhoods from previously unused areas. Indeed, Milan is to undergo 40 major construction projects worth 21 billion dollars over the next 15 years. Examples of the effects of these massive investments have been the Porta Nuova complex, the new city-life complex with its skyscrapers by Zaha Hadid, as well as large new green areas together with the revitalisation of old waterways like navigli and darsena.

Infrastructure is the second part behind Milan’s success story, as the city invested heavily in upgrading its physical infrastructure and mobility. Investing for example in building two new subways lines, one of which was completed in 2015. A huge boost in infrastructure development was brought by the world expo in 2015 that was widely considered a success and for having contributed to the improvement of the city’s transports. Milan is to benefit from further infrastructure investment in the years to come, as it will host the 2020 World Cities Culture Summit and the 2026 Winter Olympics.

Far from falling into a post-industrial stupor, Milan continued to lead Italy economically despite the loss of some of its industrial prowess. What it might have lost in post-industrial decline, it significantly gained with the creation of high-end services. For example, more than half of all multinational businesses in Italy (around 8,000) have their Italian headquarters in Milan. The Lombard capital continues to dominate the fashion industry with the Milan Fashion Week contributing to several artists and bloggers swamping the city’s bars and trendy restaurants and cafés. Beyond fashion and finance, Milan is ahead of the rest of Italy in terms of start-ups and creation of new high-tech jobs. Milan also stands out as Italy’s capital for design and creative industries. Furthermore, the city has linked-up with other economic engines through its international airports and railway links.

The economic dynamism of Milan has come with a revitalized cultural scene, capitalizing on some cultural niches it can boast — for example, the La Scala opera house. In addition, Milan houses several museums that house wonders from the Renaissance. Together with culture, Milan can provide some of the most effective retail therapies in Italy with such areas like via della Spiga and the rest of the so-called ”Quadrilatero della moda” (Fashion Quadrangle). Indeed, these cultural and economic assets have helped to develop Milan’s very own premium brand. This is why, thousands of Italian and foreign students continue to flock to the city’s universities, which cater for increasing numbers of courses in English.

Unfortunately, much of Milan’s success does not contribute to the rest of the country. Outside of it, one continues to see former industrial areas that vote for Salvini and much of the wealth it generates does not trickle down to other areas. Moreover, some even argue that Milan sucks wealth and energy from the rest of the country by attracting jobs and the brightest minds. This needn’t be the case; while it is clear that Milan enjoys unique selling points that other Italian cities do not have, its also clear that if only the other Italian cities implemented some of the above recipe prescriptions they would find themselves in a much better position. There is no reason for industrial cities such as Genoa and Turin, which used to be linked economically to Milan, to enter a prolonged period of decline. By promoting their cultural and economic assets, investing in infrastructure, urban renewal and housing stock they could buck the trend and benefit from the same positive forces that were unleashed in Milan.

Beautiful cities such as Naples could easily attract greater numbers of tourists, develop its own brand, while promoting its economic and cultural assets. Beautiful university cities such as Bologna, Pisa and Padua could tap into the developing start-up and high-tech scenes in Italy and keep its graduates instead of haemorrhaging them to Milan, and Florence could diversify its own economic base by promoting its industries other than tourism. Moreover, cities like Rome would greatly benefit from a few lessons in governance from Milan. We could apply the same lessons to dozens of smaller post-industrial cities such as Taranto, Terni, Livorno and Brescia, or cities with untapped tourism potential such as Lecce and Palermo. What is clear is that the rest of Italy should not work against Milan, but try wherever possible to emulate some of the lessons that contributed to its success as it provides a blue-print for the future success of Italy.