If Only Marco Polo Had Used 5G

Italy confirms the European trend of giving in more infrastructure and economic concessions to China. 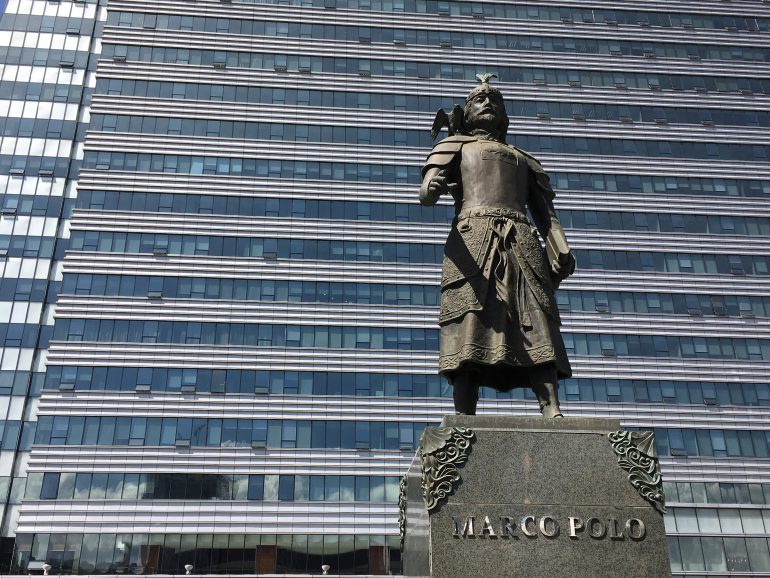 A lot of ink has been spilled on the geopolitical repercussions that the rise of China will have on the Eurasian continent. Talk now is about how the silk road is being revived and how ancient East-West linkages, that had laid dormant since the Mongol invasion, are slowly pulsating with new signs of life and increased activity. This is the same route that the Venetian explorer Marco Polo purportedly undertook on his voyages through Asia, that ultimately got him to meet the grand khan in Cathay.

A major difference between the caravan-based Silk-Road that Marco Polo would have been familiar with and the silicon highway being built today, however, is that while the former was powered by the initiative of wily merchants such as the Sogdians and Bactrians of old, this new silk road is being built by one of the most powerful and wealthy state machines the world has ever seen. China has now set its sights on controlling the main arteries of world trade and re-balancing international exchanges towards a new geographic centre at the heart of Eurasia. Indeed, the headlines are now being grabbed by so-called Belt-and-Road projects that criss-cross the Takla-makan or the Kyzil-kum deserts, as well as the string of pearls now dotting the Indian Ocean to provide a water high-way that connects East-Africa with the East coast of China.

However, the ultimate goal of the One-belt One-road project is not to stop to the reaches of Central Asia or the Red-sea, but to expand deep into Europe, and to thus knit an interconnected web of communications spanning the breath of all geodetic and geocentric latitudes. Indeed, China’s grip has been expanding into the Balkans, Central and Eastern Europe by using the same playbook they are using in Asia; they happily build new roads to nowhere, provide loans to governments to fund roadworks that will ultimately be built by Chinese labour with the added value of having to give back any new infrastructure that was built when a state cannot pay back their loans. If you think that this is an affliction of the struggling post-soviet economies, think again — the reality cannot be further from the truth, as time and time again governments such as Greece’s try to leverage their geostrategic position in return of hopping onto the Chinese gravy train.

Unsurprisingly enough, Italy does not provide an exception to the rule but rather confirms the European trend of giving in more infrastructure and economic concessions to the Chinese government or firms that are closely tied to it. China already controls container terminals in the port of Vado Ligure and is eyeing up to seize the port of Trieste, to old maritime gateway of the Habsburg Empire, which will feed the Adriatic and Balkan legs of the One belt One road (OBOR) strategy. Beyond physical infrastructure, the new OBOR strategy was greased-up and fattened with the signing of a comprehensive Memorandum of Understanding between Italy and China, estimated to be worth 2,5 billion euros. The agreement aims to foist new avenues for cooperation in logistics, trade and finance.

The Italian government of the time was at pains to present the Memorandum of Understanding as a ‘win-win’ scenario for both nations with mutual gains assured. Yet there is reason to be sceptical about Italy’s prospect of benefitting from this deal. Firstly, its economy is stagnant and in need of a quick cash injection, which makes it more short-sighted and less likely to implement level-headed due diligence. Secondly, it is negotiating from a position of weakness, taking the guise of a supplicant kow-towing to its new master. Thirdly, to make matters worse, Italy has manoeuvred autonomously without consulting friends and neighbours, greatly undermining a potential European response to Chinese advances, thus forfeiting the increased leverage that it would have come had it refrained from taking unilateral action. It is no coincidence that France, Germany and the UK have, for now, forsaken the idea of tying themselves to soon to a Chinese debt-trap and annoying Washington in the process. Fourthly, Italian exports to China remain dispiritingly low compared to its share of imports, given that China remains notoriously protectionist as regards to its own industry and the present Memorandum makes no concessions to address this. By signing this treaty, Italy might have taken the bait, which will make it vulnerable to further Chinese manoeuvres aimed at gaining a foothold into Europe through its soft under-belly.

This same power-dynamic might be replicated in other sectors once China understands the extent of its competitive advantage. Beyond the OBOR, China would also like to connect the Eurasian continent through digital lanes alongside physical ones. It has thus sought to penetrate the incipient market for 5G telecommunications by ensuring that its tele-communication companies be granted the right to develop and expand 5G connections. Unlike other countries, such as Japan or Australia, Italy has graciously allowed the Chinese telecommunication giant Huawei to build and construct new infrastructure for smart cities in Italy, among others. The risks inherent to this are multiple, but primarily due to fear of missing out, Italy might once again be allured by a quick win and into signing a deal with Huawei or ZTE to the detriment of its long-term competitiveness and potentially handing the ownership of its data sources to a non-democratic regime in doing so.

However, it is not yet too late for Italy to avoid falling into a permanent debt-trap and becoming a data slave to the Chinese Communist party. It can still disallow greater Chinese participation in its 5G network development. If wise enough, it could gain Western support in developing this technology, far away from the hands of an unfriendly regime. Moreover, Italy’s leadership must try not to play at being little Marco Polos and stop believing that it will be able to ride the Chinese dragon. A coherent and firm Italian response to Chinese overtures can be possible only if it is a European response. Indeed, Italy should consult with its neighbours and allies in future transaction to assess whether it, and Europe, stand to gain from any Chinese investment. Having said this, the prospect of future trade with China should not come at the expense of braver political moves on the part of Italy with regards to denouncing the Human rights situation in China. Hopefully one day Italy and Europe will rise from their supine position and condemn the Chinese abuses in Xinjiang, Tibet and perhaps Hong Kong, while lending moral support to China’s fledgling democracy movement.