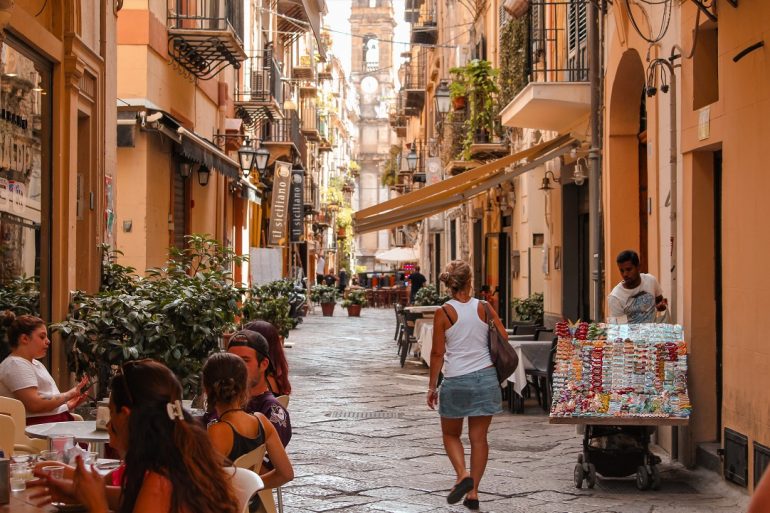 A woman strolling in the center of Palermo. Photo: Who’s Denilo ? on Unsplash.

Islands are naturally marketable. Discrete, compact and unique, they present a neat and tidy package that can be readily invested with meaning and value. Because they are by definition separate from their associated mainlands, they are by default exotic, a quality that is viewed positively by consumers who are often looking for something new: a new look, a new taste, a new location, something they can use to rejuvenate themselves. In the Italian context, there are Sicily and Sardinia, its two largest islands, but also many smaller ones that carry as much cachet, if not more; think of Capri or the Isole Aeolie, which are islands of an island, and an arcipelago, which only amplifies their mystique.

This last example raises a bit of a paradox: the Isole Aeolie can make Sicily seem kind of humdrum. Yes, eastern Sicily has an active volcano, Mount Etna, but Stromboli, one of the Isole Aeolie, is an active volcano, and therefore more dangerous, more thrilling, and more terrifying than the much larger Etna, which is buffered and subsumed by the terrain that surrounds and stabilizes it and its eruptions. On Stromboli, the lava flows directly into the sea, the flaming and molten rock sending up billows of steam. There is no intervening earth to cool and tame the explosion.

There is something totalizing and concentrating about islands, qualities that make them effortlessly assumable and easily consumable, at least in the imagination. And herein lies the connection and tension between islands as locations and islands as aspirations, islands as spaces and islands as symbols. Like the city, where young and ambitious people dream of making their mark on the world, islands are places where people, perhaps after they have had their fill of the world, dream of making their escape from it. In other words, islands serve as an ‘other’ to the ‘world’ with which people are constantly negotiating and renegotiating their relationship, especially their dependency on it for material sustenance and for cultural identity.

So the island, like the city, lends itself easily to marketing campaigns that always seek to excite the imagination to stimulate the possibility of purchasing a new life. Let’s look at Sicily in particular within this theme. It is a large island, the largest in the Mediterranean, a historical point of encounter given its central and strategic location, and it is therefore naturally granted a certain stature and importance, but it is still an island, and should be limited in nature, both in material and imaginary terms. It is surprising to discover its diversity, however, again both in material and imaginary terms, and with regard to this second register, the versatility of its use by marketers.

Film is a rich source for examples because it is both product and marketing campaign rolled into one. In no particular order, films portray Sicily and its islands as places that are characterized by organized crime (The Godfather), volcanic explosions (Stromboli), idyllic beaches (Respiro), mythic history (Kaos), eroding elegance (The Leopard), intense emotion (Cinema Paradiso) and sexual transformation (Malena), with all of these themes wrapped in a distinct isolar romance. The towns in which all of these films are set could be elsewhere in Italy, Basilicata maybe, but the fact that they are located on an island adds another dimension of strangeness and fascination to them that tugs on the viewers’ imagination, and therefore makes the film, the struggles and successes of its characters and the qualities of its landscapes, all the more intriguing.

The emergence of Sicily as a marketing tool is evident in other sectors. A fruttivendolo on the Italian mainland will not be shy in announcing that oranges, tomatoes and other produce are dalla Sicilia: pomodori from Pachino or pistacchi from Bronte. He may merely be stating fact, but there is no mistaking a certain recommendation in his voice. You should buy these fruits and vegetables because they are from Sicily. Yes, there is the implication of high quality in the association, but also an implication of a certain exotic quality. These are not just oranges or tomatoes from Sicily, they are oranges and tomatoes from Sicily!

Or take a look at fashion. Dolce and Gabbana based a fragrance and an entire line on the island, the latter capitalizing on its peculiar take on Baroque architecture. Domenico Dolce is Sicilian, and is not shy about using this fact as a point of distinction, both for himself and for his brand. A few years ago both he and his partner, Stefano Gabbana, stirred controversy by coming out against paid surrogacy, a practice that has a positive and popular purchase in the male homosexual community. In discussions of their position in interviews, both Dolce and Gabbana cited their traditional conceptions of family as the source of the objection, with Dolce in particular citing it as a Sicilian characteristic. There is no doubt that both men were sincere in their views, but it seems obvious that the attention that such a controversy stirred was intended to keep the label in the news, and therefore served as a kind of marketing.

So film, fruit, fashion… flight? Flight in both the material sense of air travel as well as in the more imaginary sense of escape, escape from the pains, strains and constraints of the boring mainstream on the boring mainland. The fact that flight happens over water makes it all the more alienating and therefore exotic. In the age when travel happened on a boat and actually on the water made the sense of detachment and estrangement even more tangible, enhanced by the much greater length and slowness of the voyage, and by the oddly mobile materiality of water, its sensuous swellings and undulations.

Peninsulas are similarly attractive and fascinating to me, perhaps even more so, because while like islands they are surrounded by water, and the most awe-inspiring kind of water of all, the ocean, they are still firmly attached to their mainland at one end, so they have a hybrid mainland-island nature, which in a way makes them even more exotic than islands. I was born and raised on one (San Francisco); I am infatuated with another (Istria); and I am enthralled by the peninsula that has captured the world’s affection and imagination more than any other: Italy. An examination of the peninsula in the geographical imagination will be a topic for a future post.