All Different But All The Same

What cultural aspects, traits, characteristics, habits, practices, attitudes and values are common to all Italians? 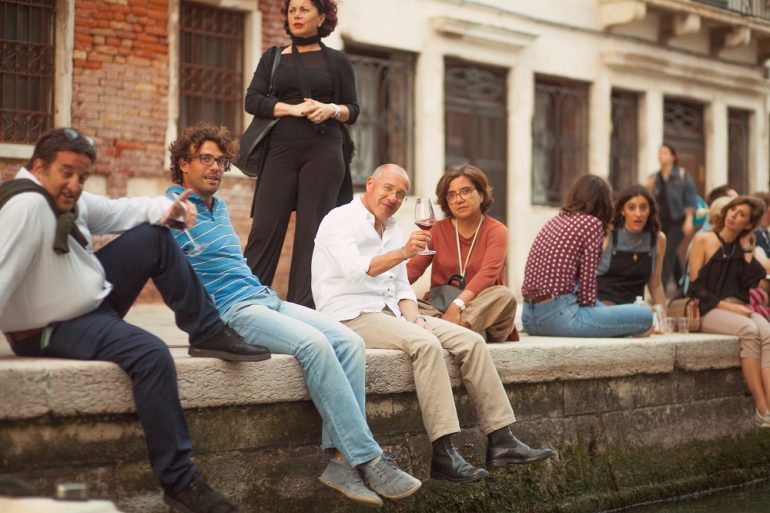 What cultural aspects, traits, characteristics, habits, practices, attitudes and values are common to all Italians?

I once spent a month in a small village located in the hills above Lago di Como named Vestreno. To get to the lake, I could take a very nice walk, an hour and change going down the hill, longer coming back, or I could take one of the small buses that ran a few times each day. One of the drivers on this line kept bees as a hobby, and one day he gave me a tiny jar of honey to taste. So I got to talking to him about all of the various aspects of a pastime that I have always found to be very peculiar, or at least particular: the suit, the mask, the smoke — even honey is unique as a food product, existing in a category of one, unless you count maple syrup, which could be considered kind of its vegetal analog. The whole occupation reminds me of fencing in its strangeness, another activity in which Italians excel, but more on that later.

I got to talking to him about honey, and he told me that Austrians, I believe, or perhaps it was the Swiss, actually like crystalized honey; they consider it to be something of a delicacy. This is quite apart from Italians who, like most people I know, consider crystalized honey to be spoiled, almost inedible. I remember once buying two jars at an outdoor market and offering one to a person who was with me, as a present for his mother. Not noticing that one was crystalized, I handed it to him, only to have him reach for the uncrystallized one instead. So I asked the bus driver, I think his name was Mario, why that is, why do Austrians (or the Swiss) like crystalized honey and Italians don’t. He said he did not know. Aware of cultural differences among Italians, I asked him if it were true throughout all of the Italian regions. He said, as far as he knew, yes: “We are all different but all the same.”

This got me thinking about what the ‘all the same’ part of his assessment might be. What cultural aspects, traits, characteristics, habits, practices, attitudes and values are common to all Italians? In this piece I will try to identify a few and discuss them.

“The family is Italy’s biggest strength and also its biggest problem,” a man in Basilicata told me. I am not sure I would quite put it that way, but I saw his point. It is hard to grow an economy — we were talking about work — and maintain a strong family life in a world where global competition has disrupted the means by which you support yourself. In the United States, where the needs of career and corporation are often privileged over those of private life and family, the stress and damage is evident and palpable. In Italy, perhaps, where family unity tends to be valued over individual ambition, it is economic success, at both the personal and corporate level, that might suffer. Whatever the good and bad of these two differing value systems, it does appear to me that devotion to family is a strong feature of Italian life that is ubiquitous throughout the country, in all regions.

Similarly, while cuisines vary greatly region by region, there does seem to be a line of similarity that runs through them all. Cipolla, carota e sedano, the trinity of the soffritto, is an ubiquitous way to start a dish in all twenty regions, and is rattled off with equal familiarity in all dialects, at least if my assiduous and perspicacious watching of Cuochi d’Italia is accurate. Another trinity, already celebrated in this column, is pane, formaggio e vino, with salumi (all kinds of cured meat), being a likely fourth member.

But food is easy, and probably too often cited in discussions of Italian life and culture, of Italian character. Also, not all of these elements are so beloved by everyone. For example, according to ISTAT, forty percent of Italian women are astemia — they do not drink alcohol — so what good is wine as a cultural marker? What might be some more unusual but still vital and essential characteristics? Calcio (soccer — or better, football)? No. Formula Uno (Formula 1)? No. La moda? (Fashion). A qualified no. Most Italian men do not own a suit, for example, so the idea that most non-Italians have of Italians as being formally elegant dressers is widely exaggerated. All Italians do have a certain look, however, a certain way of dressing and of moving and holding themselves, that is distinctive. There tends to be a suppleness to Italian body language that is unique to inhabitants of the country, and how clothes are designed, made and worn enables this quality and also reflects it.

And what is with the eyeglasses? I could not find any studies confirming my hypothesis that Italians suffer from myopia more than any other nation, but I cannot help but notice that it seems that a higher percentage of Italians wear eyeglasses than do people in other countries. Italy is a if not the leading country in eyewear design and manufacture, thanks largely to the excellence of Luxottica Group S.p.A.; so perhaps it is a matter of cultural economy, a product of that precious link between national character and national industry. I was delighted to discover that in Italy one can buy hearing aids that are as elegant in design and as face-enhancing as the most stylish eyeglass frames. What a revelation! In the United States, for example, as far as I can tell, hearing aids are still something to be shamefully hidden instead of celebrated, instead of being designed for beauty and worn with pride and a sense of style.

So maybe this is it, the Italian cult of beauty, as it is called. Most men may not walk around in camicia e cravatta, (shirt and tie) and most women do not habitually wear tacchi alti (high heels), but there is an unmistakable elegance evident in the way that all or at least most Italians dress and, more importantly, comport themselves. This is what is meant by the expression, fare una bella figura, which is not so much about being beautiful as it is about making a good impression, a part of which is certainly dressing well, not necessarily fancily or elegantly, but in a way that makes the most of your personal attributes, both physical and in terms of character. I have lost count of the numerous delightful ways that Italians have treated me, for example, on the phone, whereas such encounters in the United States and elsewhere, in my limited experience, tend to be more prosaic and work-a-day than charming and flattering.

Any attempt to discuss the characteristics of any group of people is bound to failure, more so by what is left out than what is said and gotten wrong. So I hope to take up this topic again in a future piece. Writers such as Corrado Augias and Beppe Severgnini are much more insightful and elegant on the theme than I can ever hope to be. But still, I think it is always useful to have an outsider’s perspective on the topic, one that allows for and benefits from a certain individual license.