Italian Poetry Is Not Dead

A new bottom-up movement has grown up: Poetry Slam. 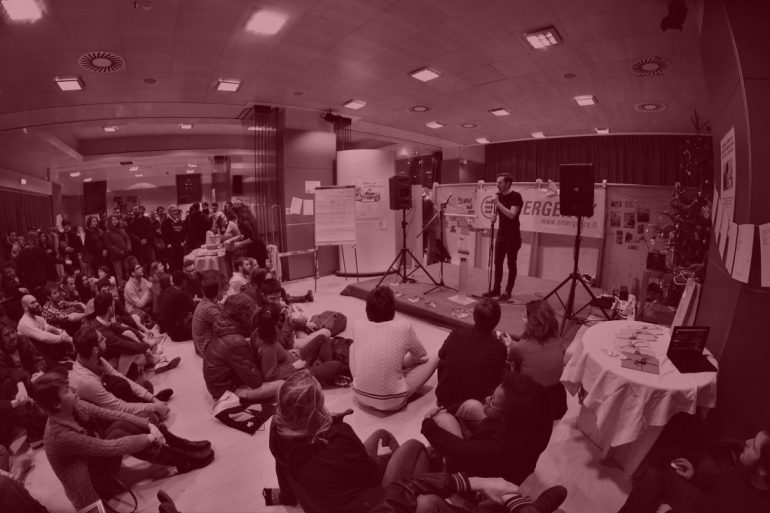 A new bottom-up movement has grown up: Poetry slam

Dante, Petrarca, Leopardi… You will never truly understand Italians until you dig deeper into our glorious past of poets. Among the positive aspects of the often vituperated Italian education system, there is the fact that almost every Italian, irrespective of his/her type of education, has studied — or has been forced to study — the classic Italian poetry at school at least once in a lifetime. However, few will ever read a poem after the end of compulsory education: poetry is not as popular as novels and is often more complex and less intuitive to read, with the result that, in the collective imaginary, poetry remains somewhat segregated to the school age, dusty bookshelves and a handful of eccentric readers.

The big news of today is that Italian poetry is not dead, and it does not limit itself to reiterate old clichés. A new bottom-up movement has grown up and is capturing the attention of a bigger and bigger public. Its aim is precisely to bring people closer to poetry by dismantling the idea that poetry is written and read by a niche of academics, critics, and poets. Its name is ‘Poetry slam’ and it has landed in Italy in 2001. It consists of a competition, usually taking place in bars, cultural clubs or small theatres, where participants are expected to recite their own poems in front of a public, among which a jury of five persons is chosen to vote their favourite poet. Participants should not use anything else except of their voice and body and should not recite for more than three minutes. The show is directed by one or more MCs (Master of Ceremony). Topics are usually not predefined and participants are left free to tell about their favourite subjects, using their own words and their own style. In this way, every show becomes various and different from the previous one: while someone speaks about past personal experiences, someone else discusses hot political issues, and some just play with words and their sounds. This makes the job of the jury even harder as it already is, but the show hardly disappoints its curious audience.

The movement has its roots in the hip-hop tradition, with which it shares the MC figure, the three minutes rule and the choice of the winner by the public, but it differentiates from it for the reason that, during poetry slams, improvisation is not required. However, poetry slam is not born in Italy: it was imported from the US, where, during the ‘80s, a young poet from Chicago, disappointed with the way in which poetry readings were organized, decided to find out and try new ways of reading poetry in front of a public. Currently, poetry slams are organized at the national level and are taking place all over Europe: Germany, France, Spain, Belgium, Denmark are just few examples. 2019 has been a lucky year for the Italian Poetry Slam Movement, that has been hosted by a popular TV show.

In 2013 the Italian Movement has taken the form of an association called LIPS (Lega Italiana Poetry Slam). The peculiarity of the Italian movement is the sense of community among the poets — every event is not just a competition, but rather a meeting of persons sharing similar interests. As a matter of fact, poets are as various as you can imagine: they range from a minimum age of around 20, being mainly university students, to men and women in their 30s, someone married with children, up to more ‘senior’ poets, doing the most diverse jobs. Teachers, computer scientists, doormen, chef, pâtissiers, accountants: poetry is for many of them more a passion than a real job, although some have managed to make it their primary activity. Poets are usually hosted by the organizers and having dinner together, turning events into opportunities to visit new cities for the weekend and getting to know locals. Being the jury composed of people in the public, predicting the winner of each competition is, as a matter of fact, impossible, weakening the competition between poets. Nonetheless, poets aiming to get to the LIPS national finale taking place each summer in a different place (in 2019 it will be in Ragusa, Sicily), travel around Italy in order to increase their chances of getting to the finale. The tournament is indeed organized at the regional level, with the winners of regional final events getting the right to access the national finale.

This sense of community and friendship characterizes also the events, in certain circumstances becoming regular appointments and fostering an interest in poetry among the general public. Despite the existence of an established community of poets, poetry slams are open to everyone willing to read his or her writings in front of a public, working as a laboratory, especially regarding the performance aspect. The predominance of performance over contents is sometimes considered as a drawback of poetry slam, reducing poetry to the oral aspect. Balancing performance and contents is actually a difficult task in such a context. This is the main critique that has been moved from the so-called academic poetry. The debate is ongoing and what is clear, so far, is that it is very difficult to evaluate the ‘poeticalness’ of poetry slam by looking at the show as a whole. This can be done only by looking at the performers individually.

If you are curious to know more about it, just check out the LIPS Facebook page or get in touch with the association hosting poetry slam events in the city nearest to you. Rediscovering the pleasure of spoken words, of pauses and silences, is actually a good antidote to the difficult times we are living in.