Italy works hard to maintain its built heritage, but there the task is harder than it is anywhere else. 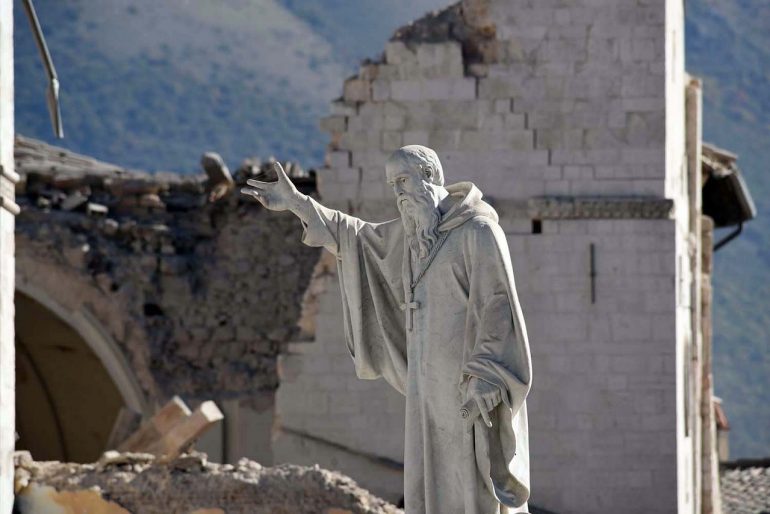 Italy works hard to maintain its built heritage, but there the task is harder than it is anywhere else

I recently saw a preview for a program on the BBC about Syrian refugees who are busily rebuilding the monuments that the recent war there destroyed. They were fifty in total, a third of them women, all learning how to be stonemasons, of all things. I could not help but admire them and think how lucky they were as they stood in an outdoor work yard steadily chipping away at blocks of stone with hammers and chisels — no power tools for them.

I then thought what such a scene might look like in Italy, and how the relation between a public and its constructed landscapes might be different in the two countries. Like all countries around the world, Italy works hard to maintain its built heritage, but there the task is harder than it is anywhere else given the country’s enormous patrimony, enormous both in terms of sheer size and number as well as in cost and, especially, cultural importance. Like it or not, Italy is the main repository of built cultural heritage, certainly for Western civilization but also for the entire world. Roma, Firenze, Milano, Venezia, Sicilia; all of these places, and the churches, temples and mansions contained within them, are Italian in origin, but they also belong to the rest of Europe, to the Americas, and at least in some sense to the entire world. The fact that earthquakes, climate change, pollution and other aspects of contemporary life wage a daily assault against these material treasures does not make the work of conserving them any easier, but thankfully war has not been a problem, at least not for the past several decades, but neither has been the need for massive reconstruction, outside of several crucial seismic zones.

As is so often the case, I reach a point in thinking about such things until I realize that I need some kind of theory to help me figure them out. The one that came to mind has to do with allergens, and here is how it goes. Our immune systems evolved in conditions that were much more challenging than the environment in which we live today. The New York Times recently had a piece on this very observation. Because our immune system no longer has to struggle against a regular onslaught of bacteria and viruses that threatened the lives of our ancestors, it has little to do, and as is so often the case, idleness is the devil’s workshop, and our underused immune systems start to make all kinds of trouble for us, which manifests itself mostly in the form of allergies and a general condition of inflammation, which can range from being merely annoying to quite deadly.

So as I watched the Syrian refugees-cum-stonemasons, I could not help but notice how happy and healthy they seemed. They were, at least from the perspective of the theory I just laid out, strong immune systems who finally had pane per i loro denti, or bread for their teeth. In short, they had work to do, and the work was meaningful because it restored not only their buildings and cities that had been destroyed by the deadliest and ugliest parasite of all — war — but because it restored also their selves, their bodies and minds, that had also suffered from the trauma. It is not for the first time that we see body, building and city as merely the same iteration of life at ever increasing scales, one nested inside the other; the idea is central to Sigmund Freud’s idea of the life drive. In a global society, this nesting continues up the scale to include television viewers who are also restored by the work being done, if only in an indirect cognitive or spiritual sense.

So as I observed in an earlier piece, there is always a small but vital silver lining to a tragedy, such as an earthquake, because after the trauma of destruction arises the creativity of reconstruction, and with it an attendant hope and vitality, a renewed connection with one’s built environment and the meanings it contains.

I am not sure that such opportunities would be available in an Italian city that had been rocked by an earthquake or other destructive event, because I am sure there are structural, political and economic hurdles that would hamper the development of popular reconstruction programs in such situations. The same is true in the United States, where there is a constant call to reform the Works Progress Administration (WPA), a government run reconstruction effort that employed thousands of Americans in rebuilding the country’s crumbling infrastructure during the Great Depression of the early 20th century. The current strong economy and job market in the United States eliminates the possibility of relaunching the WPA now, but even when the next recession hits and thousands are thrown out of work, bureaucratic and legal barriers would quash any effort to form this kind of popular reconstruction work.

But I could see this being a real possibility in Italy, where both the need for this kind of infrastructural work and the need for steady employment are so high. In addition to political will and organizational acumen, a great deal of money would be required, something that Italy, for all of its dynamism and creativity, is perennially short of. Perhaps the Belt and Road agreement that is being discussed with China could include a provision for general infrastructural development, which in Italy would surely include conservation and reconstruction work on its enormous and spectacular built heritage.

To end, let’s go back to our allergen theory. If what currently ails Italy, especially its young people, is that there is not enough meaningful work to do, then what it needs is a shock to the system. These kinds of events cannot be manufactured at will however, but maybe related remedies can be. Physicians are not telling American parents to start raising goats in their backyards, but they are saying that they should let their kids play in the dirt more often. So maybe there could be a work sector created that is akin to playing in the dirt, sometimes literally so, involving rebuilding the dry stone walls of relict agricultural terraces, for example, or restoring the ecological health of former hazardous waste sites, this latter suggestion being feasible only with proper protective gear, lest the treatment prove to be worse than the disease.