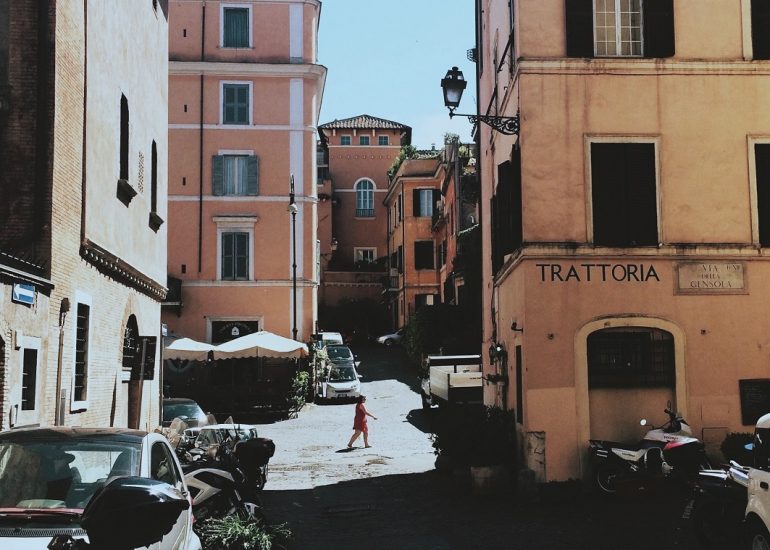 As an insider/outsider in Italy, I sense a certain tension when it comes to eating, especially around the phenomenon of meals and mealtimes. One could write an endless number of books on it, and many chefs and scholars of the subject already have, from richly narrated cookbooks to historical, anthropological and cultural studies of food ways (the official academic term). In this piece, I would like to address the topic as a discussion of three types of restaurants, or restaurant ideas (I will explain): the trattoria, the ristorante and the osteria.

First, let’s talk about what unites all three of these types of eating places. The word trattoria is related to the verb trattare in Italian, which comes from tractare in Latin, or to treat in English, as in medical treatment, for example. Scores of other words are cognate with it: tract, as in a tract of land or a tract in a contract (double score!), tractor, traction, treatment… it is one of those words that has found frequent and widespread utility in human culture.

Similarly, the word ristorante is related to the Italian verb ristorare, which comes from the Latin restituire, or to restore in English, as in to restore one’s health. And again the word has found great purchase in all languages that are derived from Latin. In fact, restaurant came to English from the French (you can tell by the fancy spelling), but Italian also has, for example, ristorazione, which denotes the restaurant business, or the activity or profession of running a restaurant, in addition to having the more generic meaning of restoration. Do you see a theme developing here?

Osteria is a little different, but still conforms to the main idea. It derives from the Latin hospes, and has a cognate in the Italian ospite, which mean both guest and host in English. In English, we split the concept and use two words, the ancient Romans (and the Italians, the French, the Spanish and other romantics), in their wisdom, used one word for both the person who gives the treatment and restoration and the person who receives it.

Osteria is one of those things that exists more as an historical idea than as a contemporary reality, sort of like continental cuisine in English, a concept that has been obsolete in most anglophone countries since the 1970s, but was at one time quite popular, being a kind of generalized European style of cooking. I seem to remember it being usually some kind of sautéed meat served with zucchini. Apparently the osteria has suffered a similar fate in Italy. It seems to be a common enough word, but I get the sense that the idea is on the way out. I remember once being in L’Aquila, researching the reconstruction efforts that were taking place after the terrible quake there. It was the the dead of winter and freezing cold, and not having brought a proper coat, I asked the hotel hostess (double score again!) where I might be able to eat. She told me that there was an osteria just a short ways away, adjacent to a nearby park. Having heard the term but not being sure what it meant, I asked her if she could explain it for me: What exactly is an osteria (Un’osteria, cos’è esattamente?). She smiled, shrugged her shoulders and blushed a bit, and said, more modestly and apologetically than she had to: Un’osteria, un ristorante… è molto buono. (An osteria, a restaurant… it is very good!). I had the vague notion that an osteria was a restaurant that made its own wine, to put it simply, like a French brasserie is a restaurant that makes its own beer, which I suppose is what a German Hofbrau is.

In any case, you get the idea: a trattoria is a place that treats you, a ristorante is a place that restores you, and an osteria is a place that, in a more general sense, takes you in and takes care of you, at least historically or conceptually. And what might all three of these Italian restaurant types stand in evidence of? That’s correct: Michel Serres’ concept of serial parasitism. Regular readers of this column might be getting tired of this idea, or might think that while it is clever and interesting, it cannot really be as important as I make it out to be. And yet, when you begin to view the world through this lens, you see that it explains a lot, or at least offers a convincing interpretation for a lot of what you see in and on the cultural and natural landscapes where we play out our daily lives, from the dining scene to global health.

The idea of the restaurant — the trattoria, the ristorante, the osteria — grew out of the necessity to take care of people while they were on the road. In English, the idea and phenomenon of the inn probably conveys most accurately the kind of institution that first arose in response to the needs of this newly emergent social type: the traveler. The word comes to English from the German in, and in both cultural and linguistic contexts, it was always a place where a hungry and tired traveler could both eat and sleep. A tavern, from the Latin taberna, taverna in Italian, is the same idea, being essentially a bar with a few rooms upstairs where you could stay for the night, but also a place where you could get a bite to eat.

So here is where Serres’ parasite idea comes in. An ospite (guest in English), while on the road — hungry, thirsty, cold, tired — looks for an ospite (same word in Italian, but in this position, meaning host in English), who will provide them with food and shelter for the night. The second ospite, what we can call, using a hybridized term, host-ospite, sees an opportunity in taking care of what we will call the guest-ospite. So, both parties take advantage of the opportunity, the chance meeting, by both giving and receiving to and from each other: the guest-ospite gives money in exchange for a meal and a place to sleep — bed and breakfast, let’s say — while the host-ospite does just the opposite by giving food and shelter in exchange for money.

So the roles of host and guest are really just two sides of the same coin, something which the Romance languages make clear but which English obscures. Nevertheless, everyone everywhere confuses this relationship when they go to someone’s house for dinner and bring something to eat or drink as a gift, typically a bottle of wine, putting the host in the difficult position of deciding what to do with it. It may not fit into the meal that they have so carefully prepared; yet if they do not serve it, they risk insulting the guest. Once you start looking at this common practice through the lens of serial parasitism you see the difficulty it presents in real life, and you also see it as a stock scene in film and on television. The difficulty, awkwardness and embarrassment of the custom lies in the fact that by bringing something to eat or drink, the guest deprives the host of the opportunity to demonstrate their generosity. This makes the guest’s wine more of an obstacle than a gift.

Fortunately, things are not so confused in the commercial sphere: the trattoria, the ristorante and the osteria serve the food and drink, while you provide what they, as fellow parasites, want from you, their host: money. Ospite, meet ospite. Now that’s hospitality.