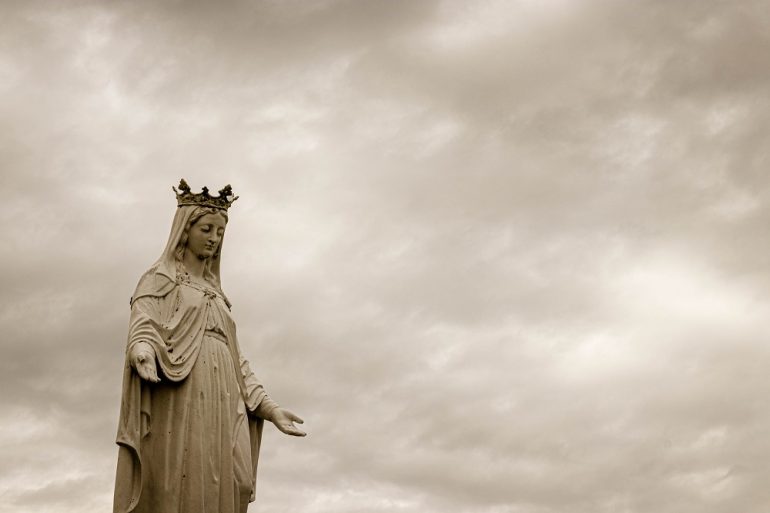 Why is the Mater Dolorosa a constant feature of human societies?

Bret Weinstein is an American biologist who favors a cultural approach to understanding evolution. Just as species have evolved over time in response to changes in their physical environment, the argument goes, so too have they transformed in response to cultural developments. Central to this line of thought is the concept of the ‘meme’, a cultural unit of information that spreads through a society through imitation, an idea that was introduced by Richard Dawkins in his landmark study, The Selfish Gene, in 1976.

A meme that I find prevalent throughout Italy, particularly here in the south where I currently am, is that of the suffering mother. Now, I feel I can safely say that the meme of the suffering mother is a constant feature of human and other animal societies throughout the world, but I want to focus on one particular trope, or representation of that meme, that is particular to Catholicism, the Mater Dolorosa, or Our Lady of Sorrows. Dawkins, who is famous for his vigorous atheism would no doubt roll his eyes at this suggestion, but Weinstein would embrace it enthusiastically, because he finds no greater living laboratory for the study of cultural Darwinism than the Roman Catholic Church, given its immensely long history, its extensive global distribution, and highly elaborate, consistent and accessible representations of its cultural norms and practices, a position with which I heartily agree.

So, like good evolutionary biologists, let’s go back to the troop of baboons that I discussed in an earlier piece. You might remember that to move through dangerous territory, the troop puts its mothers and babies in the center of a formation, while the adolescent and adult males post themselves on its perimeter. The purpose of this design is to keep the mothers and babies safe in the middle, which is protected by the males not so much fighting off attacking predators as by sacrificing themselves to them. Males do not kill for their troop, they die for it. This dynamic is found in multiple primate societies, including those of human beings.

So my aim in this piece is to probe the role of the mothers in these formations, in the hope that a greater understanding of it will shed some light on the meme of the Mater Dolorosa, and on the instantiation and veneration of female pain in general. A basic assumption of evolutionary theory is that any trait that has survived the process of natural selection probably serves some practical purpose that has helped that species adapt and survive. I suggest that female pain, particularly the pain felt by a mother, whether in humans, baboons or other primates, probably correlates quite strongly with enhanced cognition and attention, which prompts and enables mothers to do a more conscientious job of protecting and nurturing their offspring. Supporting this hypothesis are studies in which scientists have demonstrated that worrying, which can be quite painful and exhausting, actually enhances the ability of humans, male or female, to work through and resolve a problem. Compare this to an idea that is expressed in a simple saying that was born in gymnasiums, particularly weight rooms: no pain, no gain. In other words, pain is essential to the flourishing of a species. Even the exclusively female pain associated with menstruation and childbirth could have a conditioning effect on future mothers, initiating and preparing them for the immensely challenging task that lies ahead.

So why is it that the small town of Presicce, which by the way has been recognized as one of the Borghi più belli d’Italia (Most Beautiful Towns of Italy), has displayed prominently in its churches, the Mater Dolorosa, Our Lady of Sorrows. Surely other maternal qualities could have been identified and celebrated: love, patience, and equanimity, for instance, are all important and desired traits of mothers and motherhood. But no, what we have is la Madonna dressed in black with a gold heart radiating out from her breast and her face gently contorted by pain. Other representations of the figure are more dramatic and extreme, with for example seven arrows piercing the figure, each one standing for a particular sorrow suffered by Mary during her long and arduous relationship with her son.

Even in contemporary formulations of motherhood, the emphasis is on female pain. A consistent feminist complaint, at least in the United States, is that in two-parent families, it is still the mother who has to do all of the emotional labor in the family, as well as attending to the unglamorous chores of parenting such as changing diapers, doing the laundry, preparing nutritious meals, and cleaning the house. The father gets to be the ‘fun parent’ who is in charge of romping on the lawn, wrestling in the living room, and playing video games. Meanwhile, it is the mother who must be the disciplinarian: overseeing bath time and tooth brushing, scheduling regular medical and dental check-ups, ensuring that homework gets done, and the myriad other tasks that are incumbent upon the modern parent. Women complain that fathers need to step up and do their share of the dirty work, and many do, but many women also tend to have a hard time letting go of their role as the serious parent, insisting for example that men will not do the job to an adequate standard, which is to say to their standard, or more generally, to a woman’s standard.

Clearly, the modern male is making slow progress toward taking on the more painful tasks of parenting, even in societies where this shift is strongly encouraged, but there also seems to be an innate tendency in mothers to gravitate toward the more serious side of child rearing, to taking on the pain, physical and emotional, of being a parent.

Why Mary, especially in her manifestation as the suffering mother, the Mater Dolorosa, appears to be more popular in southern Italy, as compared to the northern part, and why it is almost completely absent in Protestant forms of Christianity, could make a good topic for a future piece, one that considers the emergence and development of cultural memes in a broader historical, political, economic, social and environmental matrix.