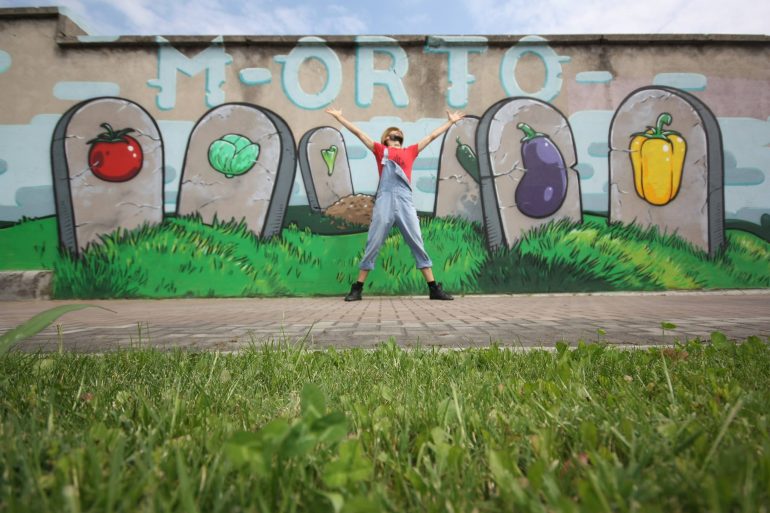 Imagine if you could erase all the hate in the world by just replacing it with something beautiful, like art, for instance. It would seem almost too good to be true, and to many this might indeed sound somewhat naive. However, this is exactly what has happened in Verona and its outskirts.

For more than a decade, Italian street artist Pier Paolo Spinazzè has been covering neo-fascist graffiti and offensive writings with colorful murals depicting all sorts of foods.

You know Italians. Food is not just mere nourishment for the body. It’s rather something far more sacred than that: the things people put on their table is a token of cultural tradition and identity, and they are proudly shared along with the deep love for their land. So, if on one hand far-right scribbles are placed around to incite discrimination and division, on the other, a smoking hot pizza will bring everyone around the same table. And Spinazzè knows this very well.

That’s why, working under the pseudonym of Cibo (food in Italian), the artist paints fruit, produce and other Italian culinary delicacies over neo-fascist and neo-Nazi symbols. Swastikas, Celtic crosses and racial slurs stand no chance against Spinazzè’s spray cans, and one by one they’re turned into giant strawberries, tomato-topped pasta dishes, and Parmigiano cheese wedges.

But what exactly pushed our man to start his mission? According to Spinazzè, “Verona has always been ‘black’,” — namely, a city that supports the right-wing ideology — “and for a person who works in the field of freedom, fascism is an obstacle.”

Yet, aside from his hometown’s political climate and his opposition to it, Cibo’s desire to fight far-right propaganda was triggered by an incident that personally hit the artist. He explained: “I have seen the marks of neo-fascist violence on my friends, as eleven years ago a group of neo-fascists killed a fellow university student. After that day I have decided that that was enough; and although it wasn’t much, I would have, should have done something about it.”

And so he did. Short after the death of his friend, Spinazzé came across a wall defaced by a hotchpotch of writings, including a fascist one. Cibo covered up the whole jumble with his first work: a wiener mural. A few days later, the artist noticed that someone had drawn new graffiti over his creation. That was it: the game was on, and Spinazzè’s mission to obliterate any expression of intolerance and hostility from Verona’s walls had officially begun.

“My weapons are art, culture and irony — three things that are completely unknown to these people,” said the artist. “Therefore, for each time they would come back to ruin my work, I would add murals of sauces onto the sausage. This way their hatred became part of my cuisine,” he added. In time the wiener dish was completed in full detail, and eventually those who came to that wall to scribble neo-Nazi symbols on it finally fell silent.

In an interview with Italian public broadcaster RAI 2, Spinazzè stated that removing hateful inscriptions is both his civic duty and his right. Being someone who makes public art, Cibo feels he needs to take care of own city. After all, Verona is his personal open-air art gallery, and there’s no place for such messages on any of his bricked canvasses.

And if that wasn’t a noble enough reason to take on this commitment, the artist stressed that “antifascism is a value that is both constitutional and non-partisan. Because of this, each citizen must be liable to defend freedom with his or her own skills and languages.” And he has chosen to do so through his fresh and vivid street art. Spinazzè continued: “There is nothing exceptional in what I do. Instead, it’s disgraceful what everyone else chooses not to do.”

At a time when the Boot’s political landscape is swiftly shifting towards right-wing ranks, Spinazzè’s work and manifesto take on a crucial meaning. It could be argued that the artist’s creations reflect an individual’s love for public spaces, since they aim at restoring and preserving their decorum. As Cibo told us, before battling the the ugly and the bad on buildings, entire Northern Italian towns were in fact plastered with swastikas and Celtics; whereas now those same urban places have become multi-coloured and more pleasant to the sight. Because, let’s face it: a mural of a huge, bright red-white-and-green ‘caprese’ just looks better than a monochromatic, wonky inscription hailing ultra-nationalist political parties.

On the other hand, someone else might see his intention as a form of protest against the rise of the far-right, its hateful rhetoric and the normalization of the latter. “I don’t want to challenge just all those fascists who keep spreading these graffiti — they are fools, and they’ll get tired of doing what they do at last,” affirmed Spinazzè. “Rather I want to overthrow the rampant and systematic acceptance of hate. People here in Verona dismiss as a caper teenagers setting a homeless person on fire or hanging mannequins of colour at the stadium. Hate has become normality,” he went on saying.

So how was Cibo’s work perceived by his fellow countrymen and artists? He revealed that at the beginning it wasn’t easy for him to carry out his task for he was lacking support from his peers: “Not even my colleagues lent me a hand — and still today they won’t. I believe they have taken such a stance out of fear rather than out of selfishness, but I have never really cared about that. Not everyone can fight.”

Ironically, the reaction of the neo-fascists had a whole different impact on Spinazzè’s calling: the more he covered up their graffiti, the more they would come back and engage in his spray can battle. And, by doing so, they have motivated the artist in going through with his mission, leading Cibo to outdo himself with new, bigger, more detail-studded works.

“While these ‘fascies’ are dangerous as a group, on their own they are a bunch of cowards and they’re fairly predictable as well. I use them to create performances that gallery artists can’t even imagine! Without their hate I would have never become so famous,” admitted Cibo.

Given Italy’s current socio-political state of affairs, one could wonder whether artists should take on a more active role in thwarting phenomena of discrimination and social division. Spinazzè seems to agree with this line of thought, and in multiple occasions, speaking on his social media and to the press, he has urged fellow street artists to join his cause and clean up their hometowns from hateful graffiti.

Nevertheless, his call for action comes with a bitter realisation. He said: “If you think of an artist as a catalyst of emotions for citizens, you would expect that as fears grow stronger, also the artists’ intervention would light up. But unfortunately we live in Italy and sloth rules over everything.”

It’s impossible not to notice the critical shade in Cibo’s words addressed to the art world: “Whilst artists raise awareness on the issue, I am on the streets trying to solve it. They produce works that cost thousands of euros, I ask for bartering. They are surrounded only by curators in their art galleries, I am standing in the crowd.”

Spinazzè added: “This does not mean being a communist or simply arrogant; it actually only indicates how much I care about people, love my work and have respect for history.”

All of this being said, Cibo anyway recognizes the true power of art within the social context. However, even in this case, this great potential has its limits: “Art can surely ask excellent questions, but, if the public doesn’t want to answer them, it is like singing in a desert.” he said.

The artist went on: “We live in an era in which ignorants are not ashamed of being as such. They actually brag about themselves, and they even rule this country. Our values have failed, and those who must set the example instead wallow in the praises of the numskulls.”

“But for the sake of my manifesto I must remain positive. All these years I have worked hard, and I have done it all by myself. Yet, many people have followed my lead, and have taken care of their own cities. Therefore I cannot but say that it all has made a difference.”

With over 180.400 followers on Instagram and almost 62.700 likes on Facebook, hundreds of hateful inscriptions gone, and a local community who supports his idea, it’s fair to say that Cibo’s project has been a success. Not only has Spinazzè covered all that’s bad with something good, but he has done it by using a neutral language comprehensible to all Italians — the things they love to eat. Why, you might ask? Because, as Cibo reminds us, “there’s no arguing at the table.”

Join Cibo on Patreon and support his expenses for colors and lawyers!

“Many people can’t take to the streets, but with little money they can take part in the colorful battle.”