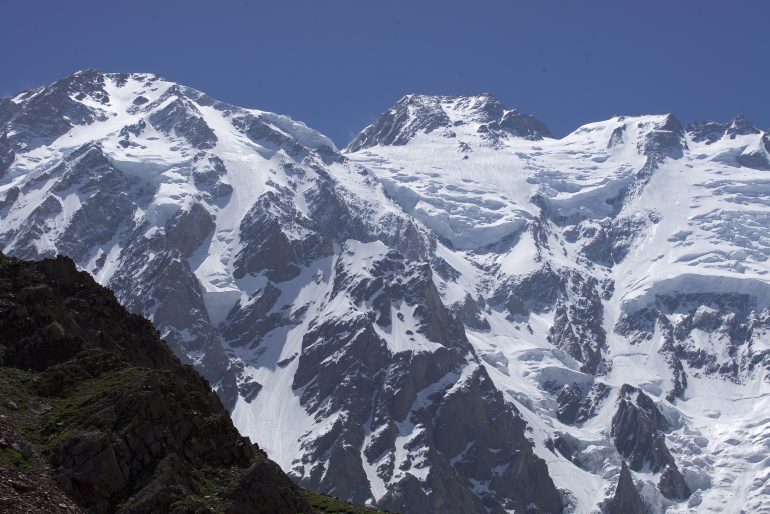 “What drives a person to suffer cold, inconveniences, bad weather, inhuman efforts? Three years spent for a vision: the winter climb on the Nanga Parbat. A challenge to the limit of the possible, that will lead the expedition to choose between the peak and the life in a course of twists and turns and in a mountainous scenario among the most beautiful in the world. I’d like to be remembered as a man who tried to do something incredible, impossible, but didn’t give up and if I won’t return I’d like to give a message to my son: don’t stop, don’t give up, get busy because the world needs better people to make peace a reality and not just an idea. This is worth doing.”

These are the last words, published on Facebook, before the winter expedition on the mountain Nanga Parbat in Pakistan by Daniele Nardi, a 42-year old Italian climber who died during the ascent of the ninth highest mountain in the world. He attempted this together with his friend and teammate Tom Ballard, the British climber and son of the popular Alison Hargreaves. She was the first female in the history to climb Mount Everest solo and tragically died descending from the summit of K2. The same fate that, 24 years later, her son would meet, in the same Himalayan mountain range, the highest point on Earth and maybe the lowest of Heaven.

Daniele Nardi died pursuing his dream, which had grown into an obsession since he had already tried four times to climb Nanga Parbat, the mountain called “man-eater” by the locals. He chose to climb up towards the summit through the Mummery Spur, an impossible way that has never been used for the ascent. It was used once during a descent in 1970 by the Italian climbing giant Reinhold Messner and his brother Günther, who was killed by an ice avalanche right there during the expedition. Precisely for this reason, Reinhold Messner some years ago warned Daniele Nardi to not climb up through that side of the mountain, calling it a non-heroic act but rather a stupidity which should be avoided by an experienced climber.

Yet Daniele Nardi was much more than a hiking enthusiast: he was the first professional Italian climber born south of the Po river (in Sezze, which is in southern Lazio), to summit five eight-thousand-meter mountains. Albeit he grew up far away from the Alpine regions, where most of the best Italian rock-climbers come from, Daniele had the mountain in his blood ever since he was teenager. Indeed, he began early climbing the mountains around his town, the Lepini mountains, reaching their highest peak, Monte Semprevisa, at 1536 meters elevation and choosing that spot for his wedding to his love, Daniela, in July of 2016.

Nardi quickly became a mountaineering trainer and spent his adventurous life involved in the mountain’s culture, taking part in many projects. After paying his dues climbing the Alps mountain range at 4000 meters, he started his expeditions towards the highest summits in the world at 25 years old. He climbed up Gasherbrum, Everest, Shishapangma in the Himalayas and Aconcagua in the Andes. His first approach with Nanga Parbat was in 2006, the mountain on which he would find his fate thirteen years later, and the following year he made headlines by reaching the summit of K2, with the expedition nicknamed “K2 freedom 2007”, aired on the national public broadcasting RAI and filmed on site by the Italian journalist Marco Mazzocchi. By accident one of the expedition’s teammates, the Italian climber Stefano Zavka, would disappear in a snowstorm coming down from the peak, staying forever on the second highest mountain in the world and, according to Reinhold Messner, the hardest to climb.

Daniele Nardi also had a huge heart; in fact he took care of charity projects in Nepal and Pakistan, always bringing the flag representing human rights on every summit he climbed, which had been signed by eight thousand students worldwide. The Italian climber had this flag with him when he decided, with Tom Ballard, to tempt fate by climbing Nanga Parbat again in the winter. They left Italy on December 18, 2018 and started to scale the mountain “man-eater” nine days later. On January 16, Daniele and Tom reached 6200 meters high but they were forced to stop the ascent due to adverse weather conditions and a severe avalanche risk on that mountainside. The climb resumed on February 22 but the last transmission of the two mountaineers was on February 24, when they were approximately 5900 meters high. Their rescue was delayed because of the military tension between Pakistan and India concerning the possession of the Kashmir region, right where Nanga Parbat lies. Four experienced climbers, one of which was the Spaniard Alex Txikon, were transported on the site but the bad weather slowed down the search. The deceased bodies of Daniele Nardi and Tom Ballard can be seen with a telephoto lens on March 6, near their tent at camp number 4. The high altitude and the dangers of that mountainside will not allow for the recovery of their bodies, which will rest there forever.

Bad luck or recklessness, it is not our place to judge the merit of their actions. We can only judge their worth, which is huge. Moreover, legend says that the birthplace of Daniele Nardi, the town of Sezze, was founded by Hercules, who after winning a battle stopped there and had a child with a virgin. It means Daniele and Hercules have a lot in common, and teach us that without heroes, there would not exist legends to tell.