Wealth And Opulence: An Interview With Farid Shirvani 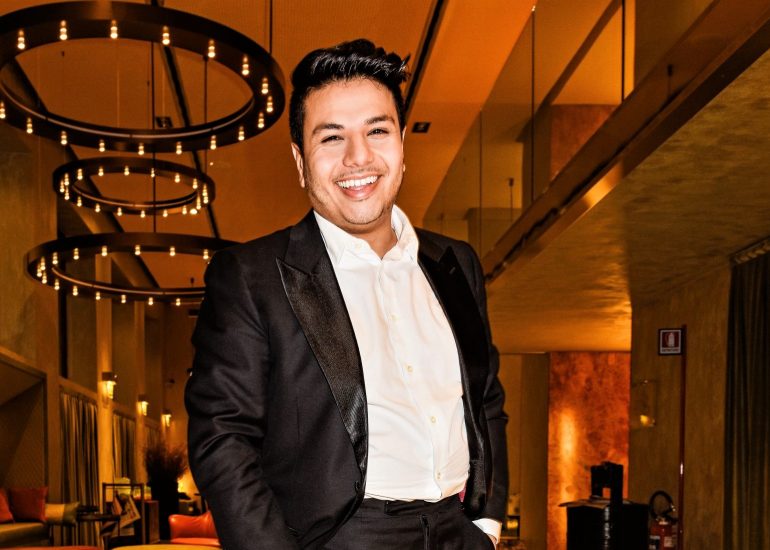 “Wealth is the ability to fully experience life.”

Farid Shirvani, born in Bologna exactly 30 years ago, is one of the most familiar faces from the TV show Riccanza (Opulence), an MTV Italy project showing the everyday life of a group of rich scions. But all that glitters is not gold, and Farid demonstrates us why. In addition to his television career, indeed, he is a normal guy at the end of his studies who also works and has many interests. Dead keen on travels, a real gourmet and NBA lover, Farid insists that real wealth is not linked to money, instead the key to adding a little bit of magic to our existence are the people you love, regardless of someone’s social conditions.

Why did you decide to appear on Riccanza and what have you learned from this experience?

First, let me thank Nicola Montese, the project manager, who invited me to take part in a show that didn’t actually exist in television. At the beginning, I was very reluctant to participate but, in the end, I decided to try because the aim of the TV show converged with my personality: the format wants to amaze and to entertain the audience, being humorous and funny at the same time. When I was younger, I worked as entertainer and I was also on stage, and I can say that these experiences helped me a lot. Thanks to Riccanza, I have understood what I really want to do in my life and it has to do with television and entertainment.

What do you think real opulcence is and what does it mean to you?

For me, real opulence are friends: my family lives all over the world – my mother is in Bologna, my father in Iran and my sister in Pescara – so, friends represent the only people with whom I can share joys and sorrows. We support one another and we live life together.

Do you believe that wealth and opulence are the same thing? Is it better to be or to have?

Wealth and opulence are not the same thing: opulence defines a superficial and carefree concept. On the other hand, I suppose that there isn’t a single explanation to offer as to what wealth is, since I consider it subjective. I believe that everyone has a different form of wealth inside. I’d rather “have” in the sense of having friends, to live life to the fullest.

I believe that everyone has a different form of wealth inside. I’d rather “have” in the sense of having friends, to live life to the fullest.

Tell us about your typical day.

It depends, I have two kinds of typical days: I spend the whole time on the set to record TV shows and other projects, or, as an independent worker, I develop new formats on YouTube or other social media. At the moment, I am working on a television project which will go public in a month, and I am developing, together with a colleague, a format on NBA that we will launch on YouTube to become more independent. Essentially, I am always busy!

You travel a lot: how would you describe our country and our food to a foreigner?

I love to travel, I love adventure and I have recently visited many countries, including Japan and United States. How can I describe Italy? It is the most wonderful country in the world. Italy has art, culture, breathtaking landscapes – from Dolomites to the Mediterranean Sea – and Italians are cheerful. And the food is even better… I like going abroad, but I wouldn’t be able to live there for too long. I love our country, the food and the people.

You were born in Bologna but now you live in Milan. How would you describe both your home town and the city you live in?

For Bologna, I would like to mention the two famous titles of the city: “the fat and the learned” – not the “red”, because I do not want to talk about politics, which is something that, in my opinion, separates people, unlike food. Bologna is small, simple and hospitable, but I don’t think it is that suitable for young people as they say. Milan, instead, is modern, chaotic, full of opportunities and advantages, and it could be considered in the same way of other European cities like Berlin and Paris.

You share many posts and stories on Instagram. Do you believe that today it is possible to show the true self without prejudices? And have you ever received criticism from haters?

No, I do not believe that it is possible to show the real self on social media because people see what they would like to see, and the main problem here is a result of prejudice and superficiality. I would compare social media profiles to TV channels: everyone can choose their favorite one according to their mood and personal interests. In my channel they can find simplicity, humor and smiles. Yes, I have received a few messages from haters, but I think they criticize me because they are not familiar with the real me. However, the solution to everything is humor!

What are the essential qualities that young people must have in order to diversify themselves and succeed at work? Do you believe that having financial resources can help to realize projects and dreams more easily?

First of all, culture and experience, the determination and the will to flourish. We should act, roll up our sleeves and do everything to make our dreams come true. Money are crucial only if you want to start a business, but I can say that for any other activity the key factors are talent, dedication and expertise. As Lady Gaga said: “If you have a dream, fight for it. And it’s not about how many times you get rejected, or you fall down, or you’re beaten up. It’s about how many times you stand up and are brave and you keep on going.”

Money are crucial only if you want to start a business, but I can say that for any other activity the key factors are talent, dedication and expertise.

You took part — together with your friend and youtuber Gordon — to Instaroute, a project through which your followers had the chance to interact with your travel by answering to a survey on Instagram. Did the format work and will there be a second edition?

Instaroute has been even more successful than we expected. Our followers chose every aspect of our travel, from the destination and what to see, to the accommodation and the food. It was hard, I had to study everything about the two places on the survey because we didn’t know which one would win. There will surely be a second edition, we are working on it, but I cannot disclose anything for now. I can only say that there will be many changes and innovations.

What is the greatest goal you have achieved in your life up to now? And what are your dreams and projects for the future?

The biggest goal I have achieved is that of being able to touch people’s heart, even if sometimes my work in television, which can be categorized as a little bit “trash”, does not show the person that I really am. Then, there are many things that I still dream to do: first, driving coast to coast in the United States, but I’ll need a lot of spare time and a good friend to share the adventure with. Then, I want to create my own family, hopefully before turning 35, while I am still young. However, I cannot plan things because sometimes life turns everything upside-down.