International Women’s Day Made a Difference. To me

On March 8, I went on strike because I felt the need to do so

All day long, I have thought about what to write in this article. This is probably the most difficult assignment I have encountered so far. Two Fridays ago was March 8, International Women’s Day, and I went on strike. This strike, which was observed all across Italy, was called the “Non una di Meno” movement. The strike aimed at raising awareness and asking for a change in legislation, above all the withdrawal of Pillon Decree. The strike was for personal and political reasons. Regarding national reasons, it was because of the conditions of women in my country, Italy, but those conditions affect women all over the world. 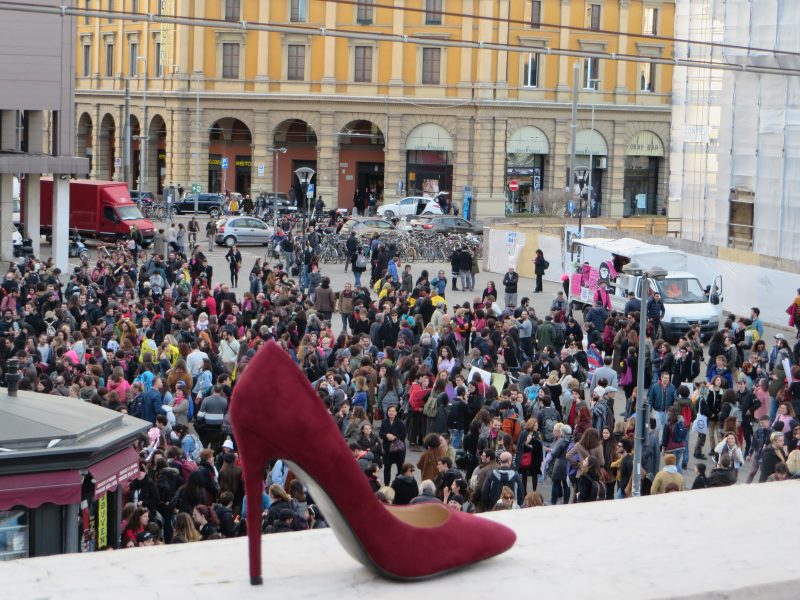 Discrimination may take different forms. According to OSCE, fewer than half of working-age Italian women are employed. However, nearly 59 percent of bachelor’s graduates are women and they make up just over 52 percent of Ph.D. Just 31 percent of Italy’s members of Parliament were female, below Ecuador, Angola and Belarus to name only a few. Not to mention the number of female prime ministers or presidents in Italy, namely is a huge round zero. In 2017, 121 women in Italy were murdered. Police handled 4,261 cases of sexual violence last year, of which 54 percent took place on the street or in cars. Some 3.5 million women in Italy have been victims of stalking at least once between the ages of 16 and 70 group. Almost half of Italy’s adult women have experienced some form of sexual harassment. An estimated 8.2 million Italian women aged between 14 and 65 – close to 44 percent – have experienced sexual harassment in their lifetime, perpetrated in 97 percent of cases by men. For someone, these figures may seem simple figures, but for a woman, they mean much more. 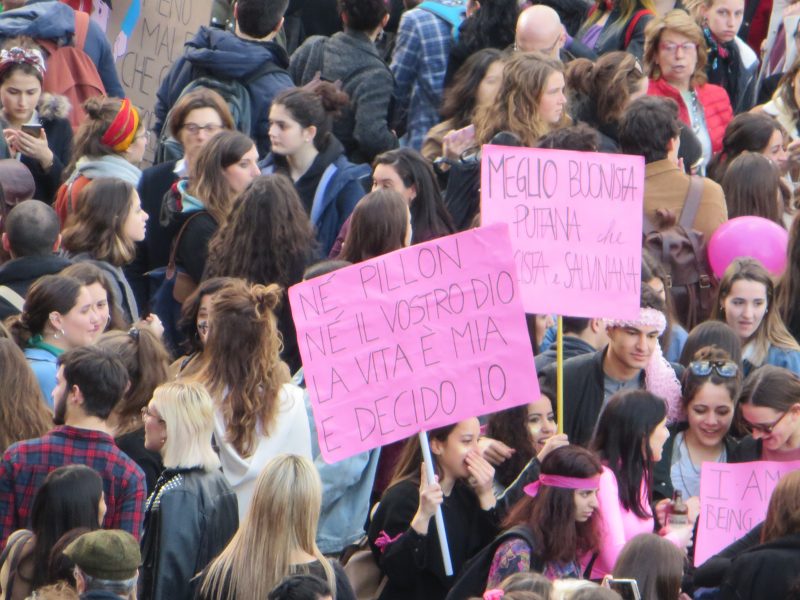 I went on strike because of these figures and because bad things had happened to me solely by virtue of me being a woman. I had felt discriminated against, but I did not know what that feeling was yet. When I started to recognize it and recognize the reality of discrimination against others, I could no longer repress that feeling and I started to call it by its name: gender discrimination. I went on strike last Friday and protested along with many other women and men who, with an awareness certainly greater than mine, claim to be feminists. But I went on strike because I felt the need to do so.

I thought about writing about the physical violence that I personally experienced. I cannot speak for all women, because there is no common “framework of violence.” But certainly, it has happened to many woman, in different forms and to varying degrees, but for those of us, we all faced it one way or another. From the old man on the bus that “rubs” up against you while having an erection (but you do not notice it right away, because you think it’s the normal bus sway and you are 14 years old and had seen very few erections until that moment and even when you realize what is going on, you are so surprised and petrified that you have no idea what to do). To the man who gives himself a hand job in your train car while you are going back home for the weekend (and again you do not notice it, because you’re reading Pride and Prejudice and you wonder why Bingley takes so long to ask Jane to marry him, and even if you’re 21 now and have seen a few more erections, you did not think they could be included in a special offer with the Freccia Card). But physical violence is much more, and it is never easy to talk about it.

The call on the strike continuous: “The strike is the answer to all forms of violence that systematically affect our lives, in the family, in the workplace, on the street, in hospitals, in schools, inside and outside the borders.” Hence, I thought about talking about the psychological violence I have personally experienced. We have all experienced this too. From the classmate who says “Well done, you got a perfect score on the last exam, did you fuck the professor?” “No, even if I would have considered it because he is pretty hot. I studied instead of smoking joints in Piazza Verdi; incredible right?”

But again, this is not the worst that happened to me. The worst psychological violence is the one we exercise on ourselves. Too many times, I did not flirt with a guy I liked because I did not want to give him false expectations in case, later on, I would change my mind. And to many others, I did not pursue anything just because I didn’t want to risk disappointing any expectations, even though it was not what I really wanted. Obviously, if one does not understand a clear “No,” then he is a fully-fledged rapist, this is not the question. But too many times it is our own “No” that we are not able to listen to. I am not saying this is our fault. I am just saying that that may happen, or at least, it happened to me.

In the third grade, a few days before the “Festa della Repubblica”, the history teacher explained to us how our constitution was created, the role of the resistance and what a constituent assembly was. She also told us that in that year, 1946, Italian women were called for the first time to vote and that this was a great achievement. In fact, for decades, feminists and suffragettes were fighting for recognition to have the same political, economic and social rights men were already enjoying. I went back home and told my mum that I wanted to be a feminist when I grew up, so she could continue on voting and I could continue to attend school. Although, at the time, I was perhaps even more a feminist than I am now; I am trying my best to develop my personal version of feminism. I have reached this conclusion. There is not one way of being a feminist. It comes with time and takes shape from our identity and our personal experiences, both for men and for women. I am still studying, and I truly wish to do it for the rest of my life (both studying and being a feminist) and if doing so, I have to go on strike, then I will. 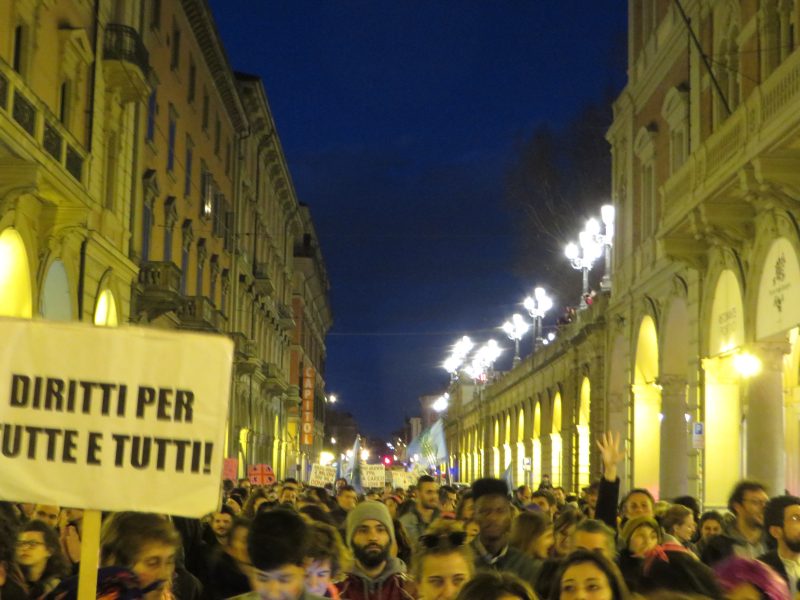 So two Fridays ago was March 8, but does it really make a difference? Does anything change? Does the act of going on strike, demonstrating, shouting slogans against the patriarchy on via Indipendenza have an impact on our daily life? Does it matter enough? Does it make a difference for the girls who are forced to marry at 12 years old with men who are four times their age? Does it make any sense to my grandmother’s caregiver who has not seen her children for 5 years? Perhaps now it does not, but it will, and for the moment it does make the difference to me. Seeing all those people in the streets of my city made me feel stronger. It made a difference because the people who were there were individuals who have experienced not only similar forms of domination and repression but also similar forms of resistance.

It makes a difference because when I came home that night, something happened. I told my family about the demonstration, the march that blocked the entire city of Bologna, the very poignant stories I had heard that morning in Piazza Maggiore, and the fact that I would like to do more for the feminist movement. Then, while I was starting to write this article on the couch of my grandparents’ house, my grandad came to me and told me: “I’m sorry Federica for all the times I told you that you were beautiful instead of smart. In my era, this was what you said to a woman to give her a compliment.”

So, yes, I think Women’s Day made a difference.