Via Francigena: All Roads Lead To Rome — Part 3 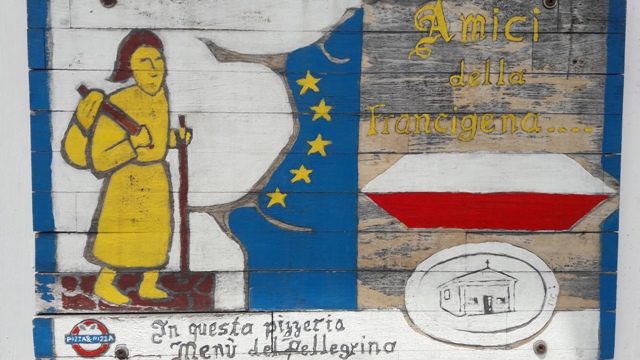 We left you in the northern coast of Tuscany, now it’s time to walk through the most beautiful part of Via Francigena

From northern Tuscany to Rome — 430 Kilometers

Lucca, “the city of the 100 churches”, is one of the most precious jewels along the Via Francigena, maintaining significant signs of its Renaissence-era prosperity within its city walls. Lucca has always been among one of the most visited art heritage cities in Tuscany. The main public square is the evocative Piazza Anfiteatro, located where the ancient Roman amphitheater used to be, designed by the Italian architect Lorenzo Nottolini. The most notable churches in the city are San Michele in Foro, with a breathtaking facade adorned by a large series of sculptures and inlays, and the Lucca Cathedral, dedicated to St Martin of Tours, which houses the most precious Christian relic in the city, which has been venerated throughout Europe since the Middle Ages. It is the Holy Face of Lucca, a wooden crucifix, which legend says was not made by a human but came into existence miraculously. Finally, a remarkable trace of the ancient Roman pilgrimage is the labyrinth embedded in the pillars under the bell tower, referencing the ancient pagan myth of Theseus and Ariadne.

Due to its position on the hills along Via Francigena, and at the intersection of the Florence-Pisa road, San Miniato has always been exposed to a constant flow of people and wars. Situated at the foot of the 13th century Tower of Frederick, which was destroyed and rebuilt after the Second World War, San Miniato is home to some very important churches like the Cathedral of Sant’Assunta and Santo Genesio, with its Romanesque style facade, the San Domenico church which instead has an incomplete facade, and the religious complex of San Francesco. San Miniato is also gastronomically famed for its delicious white truffle.

“The town of Fine Towers” dominates the Valdelsa valley with its unique skyline. Famous for its medieval architecture which is still completely intact, San Giminignano has been declared a part of the Unesco World Heritage. The two adjacent squares of Piazza della Cisterna and Piazza del Duomo are the heart of the old town, encircled by beautiful medieval buildings. It doesn’t take any imagination to picture what life looked like here hundreds of years ago. Piazza del Duomo includes the Palazzo Comunale, nearby Palazzo Vecchio del Podestà and the Collegiate Church of Santa Maria Assunta, with its magnificent Chapel of Santa Fina, regarded as one of the jewels of the Renaissance. A required stop for the pilgrims was also the Sant’Agostino Church, internally decorated with frescos on The Life of St Augustine by Benozzo Gozzoli.

Siena is one of the most visited cities in Italy and owes its popularity and its rich art heritage to the Via Francigena. Indeed, this stage of the pilgrimage toward Rome was very important, having many sleeping accomodations and a hospital, among the oldest hospitals in Europe, which is now the museum of Santa Maria della Scala. Piazza del Campo, the main square of the city, which is distinctively shaped like a seashell, is popular worldwide for its beauty and medieval architectural integrity, and especially because it is where the biannual horse-race well-known as “Palio di Siena” takes place. It is regarded as the most famous historical event in Italy: an authentic ritual and rivalry among Siena’s citizens, drawing the attention of visitors from all over the world. The Palazzo Pubblico and the Torre del Mangia overlook the square, as well as several charming stately homes and the Fonte Gaia. There is also a museum you shouldn’t miss: the Museo dell’Opera Metropolitana, next to Siena Cathedral, which houses several unique collections of artwork produced by Italian masters.

Crossing the border between Tuscany and Lazio, the Via Francigena touches the old village of Acquapendente. It magnificently preserves many traces of its past: among these is the Cathedral dedicated to the Holy Sepulchre. The Cathedral has, buried under the apse, an exceptional 10th century crypt, which contains a blood-stained stone, said to have come from the Holy Sepulchre in Jerusalem.

Lying on the north bank of its namesake lake, Bolsena is a quaint medieval old town dominated by the Monaldeschi Rock. Among the pilgrims, the Basilica of Santa Cristina was a common stop. In fact, a miracle occurred here in 1263, which started the Feast of Corpus Christi in its celebration and a liturgical solemnity then spread throughout the whole Roman Catholic Church. The miracle happened when a Bohemian priest, in doubt of the doctrine of Transubstantiation, reported bleeding from the host he had just consecrated during the Mass, which then wet and stained the white linen cloth, the corporal, and the liturgical linen underneath him in the form of Christ.

A medieval and college town in northern Lazio, Viterbo has always been loved by the Popes. One of its historic quarters is San Pellegrino, which in Italian means pilgrim, where you can admire the typical medieval houses with “profferlo”, an external staircase. Within walking distance there is the Viterbo Cathedral, dedicated to Saint Lawrence, and the breathtaking Papal Palace, built in the 13th century, with its wide roofless “loggia” overlooking the landscape of the old town. Viterbo is also famed for its patron saint Santa Rosa. In honor of her, on every September 3rd, they raise a 30-meter high tower called the “Macchina di Santa Rosa”, and carry it through the narrow streets of the city by 100 devout men called “Facchini di Santa Rosa.”

Finally we have reached our destination! The pilgrims ended their amazing journey along Via Francigena at St. Peter’s Basilica, praying on the grave of the Prince of the Apostles. But the Capital of Christanity had another pilgrimage in store for the devoted travellers. It was started by the third Apostle of Rome, Philip Neri, and is today known as the Seven Pilgrim Churches of Rome, or in Italian: “Giro delle Sette Chiese.” This itinerary includes visits to the seven greatest churches of the city (in addition to St. Peter’s Basilica): the Basilicas of Saint Paul Outside the Walls, St. John Lateran, St. Mary Major, Saint Lawrence outside the Walls, the Holy Cross in Jerusalem and  St. Sebastian Outside-the-Walls, then replaced with the Shrine of Our Lady of Divine Love in the Jubilee 2000 by Pope John Paul II. The Eternal City, unlike the other cities around the world, does not just keep the traces of its history; it is itself the history. That’s why all stories and all roads lead to Rome.