To Milk Or Not To Milk? Inside The Sardinian Shepherds Protest 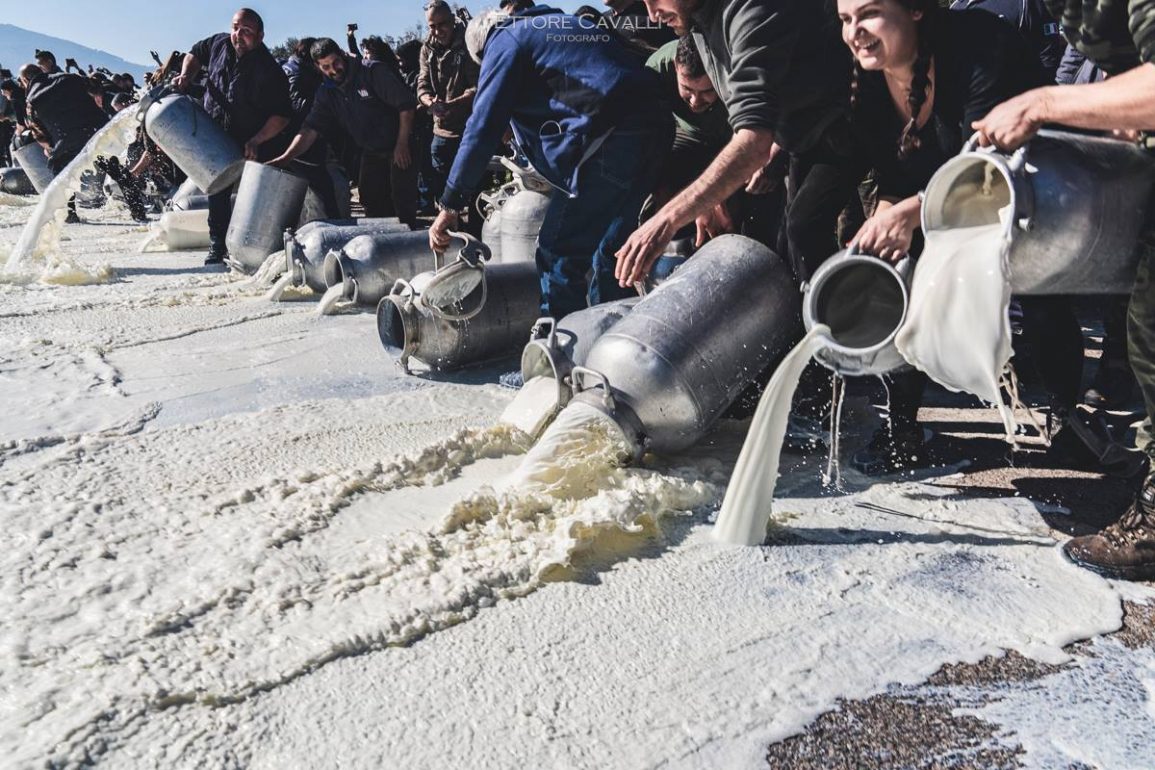 The Italian island of Sardinia, mostly renowned for its beautiful and crystalline sea, is now in the spotlight for another — whiter — sea. Indeed, on the eve of the regional elections, Sardinian shepherds have been dumping hectolitres of sheep milk on the ground for two weeks, to protest against the very low prices of their product. “Milk price is so low that we’d rather throw it away than sell it to industrialists for almost nothing”, they say, stalling cheese production by doing a very strong gesture that found a great media impact.

The reasons of the protest

Clearly, their protest is not only an act. Rather, it is the extreme manifestation of their discontent caused by the fact that milk price dropped from 0,85 to 0,60 euros per liter in a year. “Sardinian shepherds can’t take it anymore, because their milk has come to cost 30 cents less than its cost of production, excluding workforce”, says Gavino Pulinas, shepherd and farm owner. Battista Cualbu, president of Coldiretti, the main association of representation and assistance of Italian agriculture, claims at least one euro per liter, otherwise “numbers don’t add up”.

To better understand this phenomenon, it is worth saying that Sardinia represents the main Italian producer of sheep milk, as well as the region with the highest numbers of sheeps and goats in Italy (almost 44 percent of the total). Therefore, it is easy to imagine how important the sector of pastoralism is to the local economy, which obtains its profit mainly thanks to the production of Pecorino Romano cheese. Mostly known as a fundamental ingredient for making carbonara, this cheese is so required abroad so that 70 percent of its production is intended for export, especially to the United States (63 percent).

The role of cooperatives

As a Protected Designation of Origin (D.O.P) product, Pecorino Romano must be produced and processed in a defined geographical area, according to the rules defined by an appointed control body. This organism should play a central regulative role by establishing parameters and thresholds in the production quota, in order to reduce price fluctuations and avoid overproduction. However, sanctions for the “disobedient” dairies have been often considered so low that, between 2016 and 2017, despite the stability of cheese market demand, many industries did not respect restrictions, causing an overproduction and the collapse of prices from almost 10 to 6 euros per kilo in three years. Production of sheep milk followed the same path, increasing enough to affect sales price charged to the cheese industry.

In other words, a very predictable and basic market law revealed itself: supply of sheep milk exceeded demand. Hence, all the protagonists of this commercial chain suffer the consequences, although shepherds are the most affected and vulnerable category. Their milk is the raw material, the first ring of a wider production process that inevitably follows market trend. On the other hand, setting once and for all the milk price besides damaging end consumers could lead to a worse scenario, encouraging shepherds to fuel the overproduction.

Disorganization and little foresight are the two main causes of this situation, whose responsibility is probably shared between dairies, government, cooperatives and shepherds themselves, for different reasons. Too much milk, weak regulation and poor production organization, all confluence in the Sardinian crisis. A possible long-term solution for shepherds could be diversification, namely selling milk for other purposes and different cheese, or producing cheese themselves. In the meantime, regional elections should be an incentive for government to find an immediate solution and prevent Sardinia from drowning in its own, bitter, white sea.