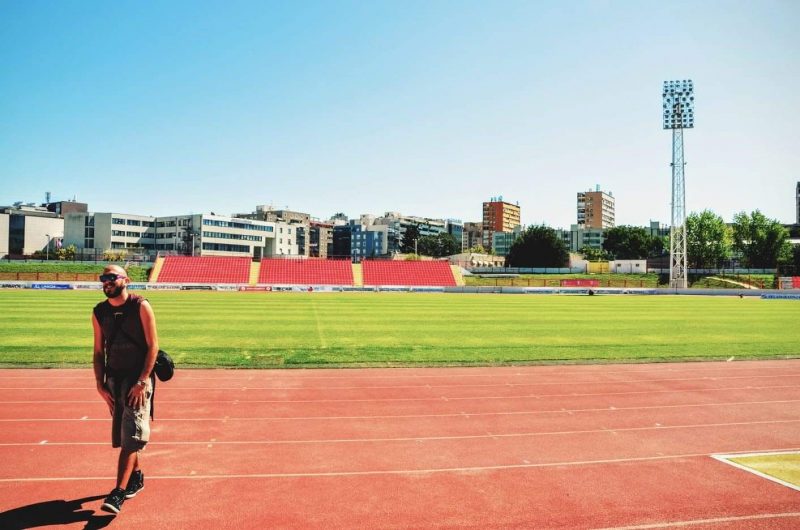 Gianni Galleri is an emerging writer, passionate about Balkan football and its stories

We met Gianni at his book presentation of “Curva Est. Un viaggio calcistico nei Balcani” — Curva Est. A Footballing Travel in the Balkans —, a romantic and crazy travel diary across the countries behind the old Iron Curtain. Here, football is still affordable to the working class and stadiums are not theaters for a chosen few, but rather gathering places made of culture, people, history, full of that wind of change which, in 1989, would transform the world forever due to the collapse of Communism. Anyway, Gianni Galleri loves football, and in particular its stories and anecdotes from behind the Iron Curtain. However, his first great book is set where the game of football was born in the 1800s: in England, and more precisely in London, renamed by Gianni “The City of Football”.

Gianni, from “La Città del Football. Viaggio nella Londra del calcio” to “Curva Est. Un viaggio calcistico nei Balcani”, from London to the Balkans: what is the thread in your books?

There’s more than just a common thread, there are two: travel and football. London and England on the one hand, and the Balkans on the other, are very different places, scarcely linked to each other. However, I tried to “read” both of them through the lenses of football and of my love for traveling, thus applying pretty much the same categories: I think it is an interesting way to interface with places far from home.

Your books look remarkably like travel diaries and you are incredibly able to bring the readers into the places you have been to, making them breathe the atmosphere of the stadiums, the colors, the traditions and the smoke bombs. Does the authenticity of a book, to you, lie in sharing an experience?

I always write thinking about the book I would like to have in my hands during my trips. Something that helps me to fully taste the places where I have been: not a tour guide “in plaster”, neither a novel that would only unveil the view of the narrator. I think I’ve reached my goal, at least in some passages of my books.

The Balkans, and more in general East Europe, compared to the westerner England and Italy where you were born, have an important cultural appeal for those who didn’t live a Europe divided by the Iron Curtain. Do you call yourself a nostalgic — or maybe just curious — of that time?

I was born in 1983, in western Europe. I can’t be nostalgic about times I never lived. But, of course, I’m very curious. I try to figure out stories that are not mine, always with the intent not to forget my position as privileged observer and not to fall into laziness and stereotypes which expose ridicule whatever read of the past. I try to understand complexity with curiosity. For this reason I talk to people, read books and travel.

Your football trips and your digressions into history might interest a large part of football fans, transcending national borders. As you know, our readers primarily come from abroad and especially from the English-speaking world. Have you ever thought about translating your books into English to spread them out in those countries you talk about?

More than having thought about it, I hoped it. However, for now, nothing’s happened yet. I think that “La Città del Football” is not for the British public. It would be like translating into Italian a book about Italy by an English author: probably, some great naivety would arise and this would never please the local public. On the contrary, “Curva Est” could be taken as a great book in England, but also in Spain or France. The editorial dynamics are the real problem, since I ought first find a publishing house interested in this work. “Urbone Publishing” is a brave but small publisher, and they may not be able to face the foreign market by themselves. However, if there are publishing houses interested, it would be my honor.

Now, if you don’t mind, tell us about yourself. Who is Gianni Galleri?

I’m a 35 year-old boy born in Tuscany, but it’s already been thirteen years since I moved to Rome. After taking the first steps in local journalism, I started work in the field of communication for a large Italian company. This settled my hours in a positive way, since I could finally plan so much better my work shifts, holidays and weekends off. Thus, I traveled a lot, exploiting also the low fares from Rome Ciampino Airport. As regards the things I love to do, reading, playing football and visiting new places are my priority: I believe you can see it also in my books! Writing is the best way that I found to interface with the outside world and the others.

The biggest thrill you felt in your football trips.

Maybe I’m a little self-centered, but one of the feelings that always got me excited and made me see that I was doing a great thing, is that moment when you realize your interlocutor lets his guard down and understands you are truly and sincerely interested in what he is telling you. When he feels that you really want to know the stories about Poli Timisoara in Romania, Botev Plovdiv in Bulgaria or Gorica in Slovenia. This moment where the meeting becomes respect and mutual esteem, sometimes even culminating in friendship. That’s when I really feel emotional.

The greatest friendship you made during your football trips.

Undoubtedly, my three buddies who, alone or together, took part in my travels. Stefano, Mex and Matteo are in their own right the secondary authors of my adventures. Then, behind the Iron Curtain, there’s lots of people: Paolo, who sends me really long voice messages in Calabrian dialect from Cluj-Napoca; we never met, but he helped me a lot during my rounds in Romania. There is Giorgio, who lives in Belgrade and is likely the best reading you might do about former Yugoslavia. Erold, who every Friday sends me pictures of the choreography of Partizani Tirana. There are Danijel from Nova Gorica, Licu from Timisoara, Plamen from Veliko Tarnovo, Edin from Sarajevo and, last but not least, Damiano, with whom I started visiting Romania: he was the first reader of my book and moderator at my first presentation, he is a great person!

Have you found love? If yes, which side of the Iron Curtain?

“Curva Est” kicked in when I went berserk for love, so I bargained with my boss three days off, heading to Trieste and then to Istria to clear my mind and see clearly on things. She is actually a Westerner, but she’s not a love for everyday. Yet, in the book, both evident or more hidden signs of her are everywhere. This love accompanies me in my lonely journeys, during which I tried to tell to one other person what I was seeing with my eyes, imagining she was with me. I would be rather afraid of writing again, if i knew this person didn’t want to read what I wrote. 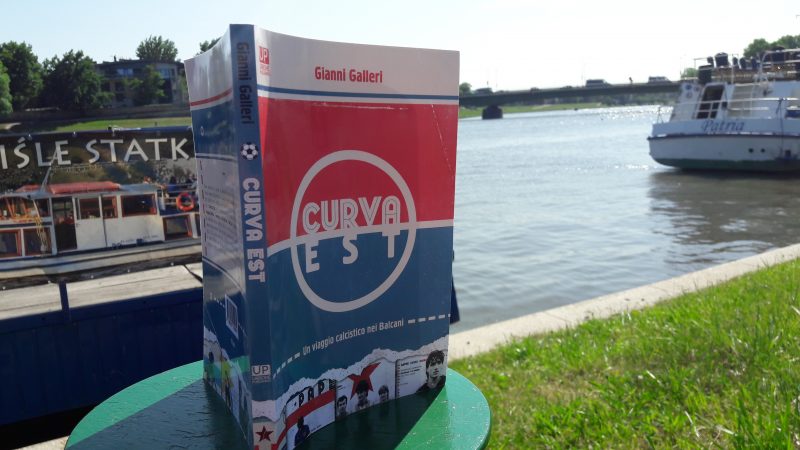 That sucks! We would be forced to watch rugby. Mamma mia, what a nightmare! No, seriously, it would be a horrible world, because football really is a magic filter that takes us from everything around us to a different world. It makes us feel closer, it enables us to do anything, it really makes us better people.

Reading “Curva Est”, I was very impressed with the quote you took from the Turkish poet Nazim Hikmet while you were leaving Thessaloniki: “Our most beautiful days: we haven’t seen yet”. Do you think this verse goes for you too? What are the plans of Gianni Galleri, the writer?

After I write, I always feel empty. But this time, unlike what I did after London, I didn’t stop and I kept traveling, meeting new friends, watching football matches and exploring new cities. Together with Damiano Benzoni, I made a documentary on Petrolul Ploiesti and its rebirth in Romania. Who knows, maybe a new idea will actually come out soon in my head. And I hope so, because writing “Curva Est” — and showing it around Italy — was beautiful.