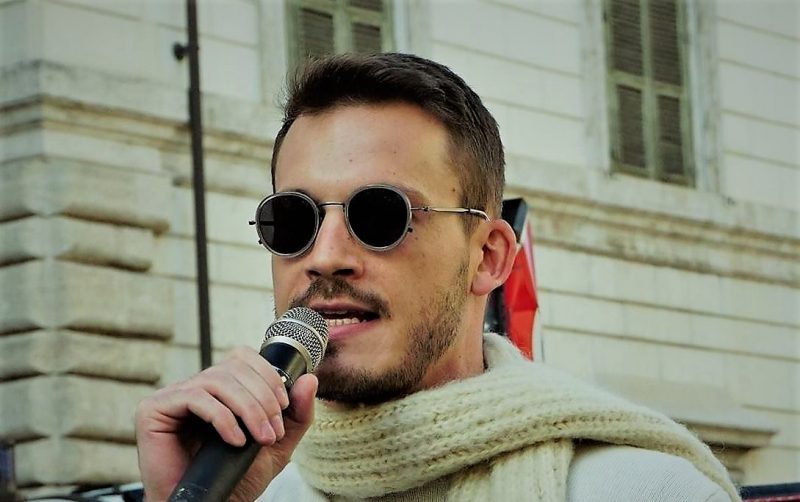 ‘Rise for Climate’ is fighting climate crisis in Italy and globally. Our interview with Neal Huddon-Cossar

On September 8, in Rome and in several other cities in the world, people gathered for ‘Rise for Climate’, an event to demand local institutions to take steps, as choosing renewable sources, to fight climate change. Neal Huddon-Cossar, who volunteered to help organize the event in Rome, gives the readers an overview of the issue and the importance of this event.

Climate Change has always been a global issue and concern – these last years more than ever. As demonstrated by Hurricane Florence and super-typhoon Mangkhut that respectively hit North Carolina and the Philippines (alongside part of Southern China) within a 12 hours difference from each other this September, geography is not relevant anymore. Globally we are observing the effects of human-induced rise of greenhouse gases that increase the temperature within the atmosphere, leading to other environmental consequences. Indeed, Kerry Emanuel of the Massachusetts Institute of Technology estimated that hurricanes like Harvey (2017), were six times more likely to happen by human induced greenhouse gases, with the chance that by 2100 the risk would be 18 times higher.

It is important now more than ever to spread awareness on the issue, like the ‘Rise for Climate’ event organized in Rome and several cities globally on September 8 by Al Gore’s Climate Reality Project and The Europe Branch did. The rally was originally launched and orchestrated by 350.org to encourage local communities to go “Fossil Free” by promoting renewable energy.

In today’s interview, Neal Huddon-Cossar, who volunteered to help organise this event in Rome, explains the importance of taking action against this climate crisis.

Keep fossil fuels in the ground

Originally from San Francisco, California, Neal has lived in Rome for over seven years. Here, he completed his undergraduate in International Affairs writing a thesis on the United Nations Convention on Climate Change (UNCCC), with a specific focus on the legal and political architecture of the 2015 Paris Agreement and the importance of “non-party” stakeholders in Climate Change governance worldwide. This October he will begin a distance learning Master’s in Global Energy and Climate Policy at SOAS University of London.

“As my personal biography transcends national boundaries, so does the climate crisis”

“As my personal biography transcends national boundaries, so does the climate crisis,” states Neal. “From heat waves in Europe to unprecedented wildfires in my home state of California, where my aunt and uncle had to evacuate from their home during the Carr Fire, we can see that global warming affects us all regardless of our ethnicity, socio-economic class, or political party.” And geographical location, we could add, since climate crisis is causing concerns all over the planet.

Not only Rome. On September 8, Rise for Climate gathered more than 250 thousand people in over 850 actions in 95 countries to demonstrate “the urgency of the climate crisis.” Neal underlines that “communities around the world brought attention to the increasing impacts they are experiencing and demand local action to keep fossil fuels in the ground.”

In fact, in Piazza Testaccio, where the event took place, Neal explains that, “locals gained the opportunity to learn about the options that they have as consumers, to switch their electricity bill to renewable sources, a service that is now offered by a growing number of renewable energy providers in Italy. Climate action could not get more local!”

The importance of local communities

Having now entered the Anthropocene Era, called this way due to the strength of the impact of humans on nature and the climate, Neal states that “the next 5-10 years are critical ‘make or break’ in fighting Climate Change, a view shared by many scientists.” He continues highlighting that local action, as in Italy, is crucial and that more local communities should enact legislations and policies to fight fossil fuels, “as in my home: California, representing the fifth largest economy in the world, has just enacted a legislation committing the state to 100 percent carbon-neutral electricity by 2045. Requesting local institutions to take such steps is crucial to the health and prosperity of human-kind.”

“Let’s encourage the readers to take part in fight this climate crisis. Anyone can organize their own local climate action”

When asked if he wished to make any last comments, Neal eagerly added, “Let’s encourage the readers to take part in fight this climate crisis. Anyone can organize their own local climate action through the ‘Go Fossil Free’ platform on the website, www.gofossilfree.org.”

And it is quite hard not to agree with Neal. Climate Change is happening here and now. We can only try our best to take sustainable decisions, spread awareness, and together improve the state of the Earth for ourselves and the generations to come.