An Italian populist majority government getting as far as Brussels is now becoming reality.

The yellow-green government formed by the main Italian populist parties, the Five Star Movement and the Northern League, has long been the boogeyman for both the international establishment and the liberal public opinion. Now this scenario is coming true, as the two radical forces signed a goverment contract that we have summarized in the following short points:

The Italian public debt reached years ago the horrific figure of 132 percent of the Gross Domestic Product (GDP). However, the new coalition pledges to increase public spending in order to stimulate the national economy. The new executive would follow a Keynesian muliplier model, linked to the more generic promise to decrease taxes and end austerity.

Renegotiation of EU treaties was one of their mantras during the electoral campaign. Now, Luigi Di Maio and Matteo Salvini want to structurally review the eurozone mechanism and the European economic governance.

The main focus of the new government’s foreign policy would be the removal of sanctions against Vladimir Putin’s Russia, regarded as a crucial economic, commercial and geopoltical partner. While the United States would remain a ‘privileged partner’, it is no secret that both parties look East.

The Northern League imposed its hard line, as the two parties pledged to stop migrant landings through a crackdown on migrant smugglers and to start systematic repatriation of rejected immigrants and asylum seekers.

Both parties agreed to freeze the sale of the national airline company, Alitalia, and to renegotiate the conditions to complete the high-speed railway between Turin and Lyon (TAV). The government contract also provides for the reform of the Fornero Law, introduced in 2012 to increase the pension age and lower the guaranteed social security benefits, by allocating 5 billion euros for the categories excluded from the labour market.

The League’s hobbyhorse is fiscal policy. In particular, they managed to introduce in the shared program the so-called ‘flat tax’, a 20 percent fixed fiscal rate for all families and enterprises, replacing the current system of different income tax rates.

The Five Star Movement’s labour policy is centered on the introduction of an unconditional basic income, remaining extremely vague on the enormous financial cover needed. 780 euros per month is the amount envisaged.

The conflict of interest is a delicate theme for the Northern League, as it is the most sensitive issue for its center-right ally, Silvio Berlusconi. However, Di Maio managed to push Salvini to endorse a harder stance on conflict of interest criteria ‘related to any form of interference between a public interest and any other kind of interest’, as stated in the program.

In terms of security, the program is centered on the principle that self-defence is always legitimate, even through the use of guns. The Northern League also pushed to include in the program the recruitment of more police forces, the closure of all irregular camps and a tougher stance on sexual crimes.

In the government contract, a rather vague-sounding debate on compulsory vaccination is mentioned, stressing the ‘necessary balance’ between right to education and to health for those children who risk to be socially excluded due to the current provisons on vaccination’.

The ‘Osservatorio sui Conti Pubblici Italiani‘ (Observatory on Italian Public Finances) estimated the costs and the financial cover needed for the proposed measures contained in the 5SM-League government contract. The figures highlight a one hundred billion euros financial hole. All the details in the following infographic: 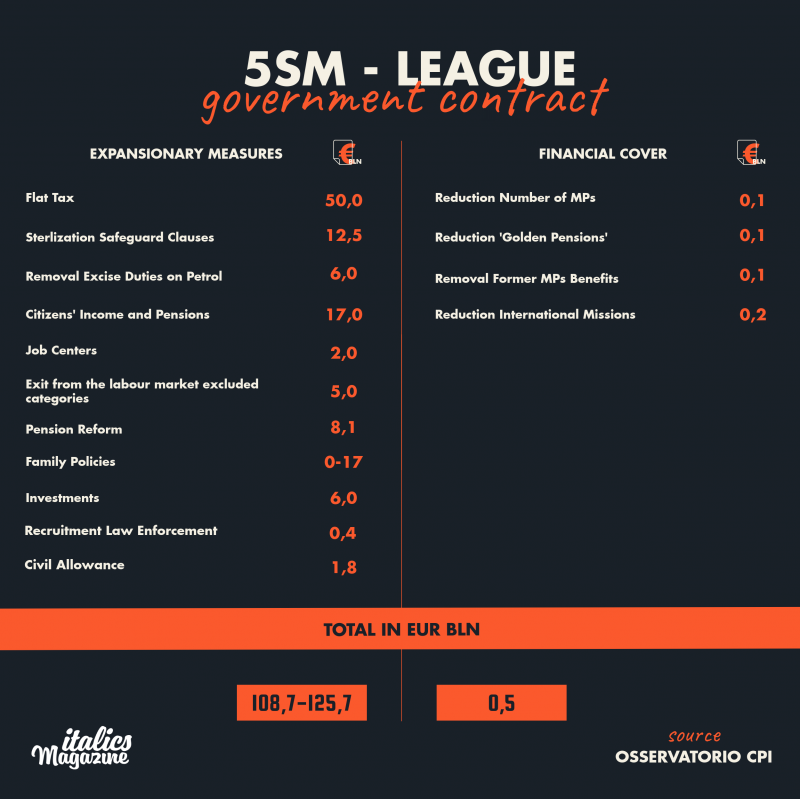