This is what the next Italian Parliament will look like.

The Italians voted on Sunday, March 4 to renew their Parliament. The definitive distribution of seats resulting from the election, sees the Five Star Movement as first single party and the center-right as largest coalition in both the Chamber of Deputies and the Senate. However, by those numbers, nobody can secure the majority.

Therefore, among the possible solutions to avoid a hung parliament, a government set up by the pre-electoral alliances and a large coalition between the Democratic Party and Forza Italia have to be excluded.

A possibility would be to form an ‘odd couple’ between the Democrats and the Five Star Movement, as both forces would have the seats required to govern, or a coalition between the populists. However, the party leaders have ruled out this option so far.

The definitive breakdown of parliamentary seats is as follow: 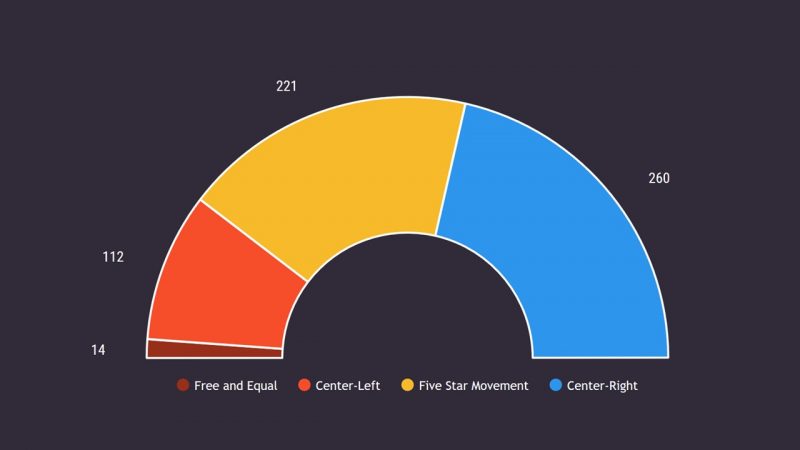 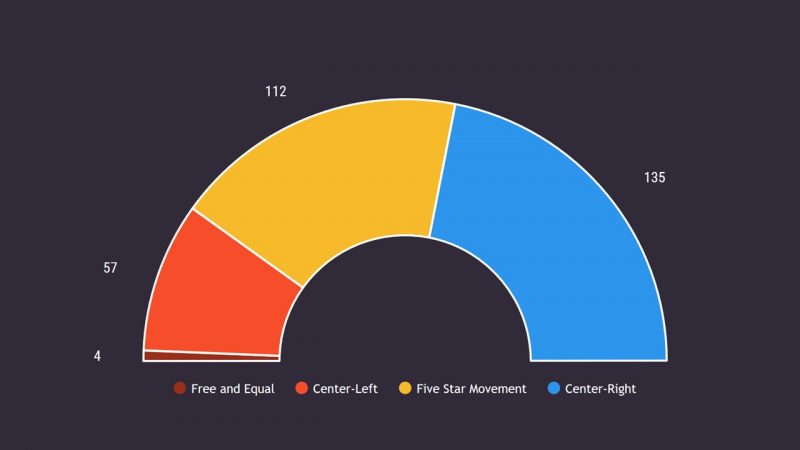 The center-right obtained 260 Deputies and 135 Senators, taking votes especially in Northern Italy. Instead, the Five Star Movement won in the South and managed to obtain 221 seats in the lower chamber and 112 seats in the higher chamber. The center-left coalition, and the Democratic Party in particular, are the biggest losers of this round of voting, as they only came third with 122 Deputies and 57 Senators.

Italians voted with the ‘Rosatellum‘, a one round voting mixed electoral system. Voters choose over a third of the MPs by first-past-the-post, where candidates compete on a ballot in a district and the first one with more votes wins the seat, and about two-thirds by proportional representation, with the distribution of seats reflecting the actual percentage of votes that each list achieved.

This system, structured in such a way and valid for both the chambers, encourages pre-electoral coalitions and post-electoral bargain. Indeed, it maintains a mainly proportional structure, while the political spectrum is fragmented into three major poles that can reach the absolute majority (316 seats for the Chamber, 158 for the Senate) with extreme difficulty.